One Off A Flyer 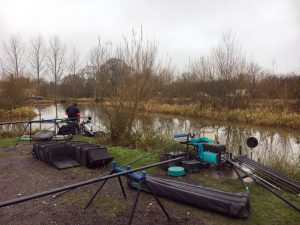 It’s frustrating being sat less than six metres away from one of the best pegs on the lake but that was my destination for Round 5 of the Tunnel Barn Winter League.

I was on High Pool 14, which I think is put so close to flyer 15 just to help slow it down! My peg is about 12m wide with reeds opposite. Next door there are two islands to go at plus loads of open water in the gap where I counted 30+ fish rolling before the start! So, it was definitely a day for popping the blinkers on and trying to catch as best as I could.

Next door ended up with 57lb. I felt I did ok for a half-decent 44lb winter weight. Sadly that was just below halfway as the whole lake fished its nuts off! I had beaten everyone from peg 3 round to me but the 30s and 40s fished unbelievably well with 80lb+ weights and two 100lbs! In fact I think six of the top 10 came off High, which shows just how good this lake can fish on its day.

Mild weather really switched the fish on, so pegs with a decent bit of shallow water all scored. Sadly, my peg was 5-6ft all the way to the base of the far shelf and then a shear slope up to the reeds. Even tight to these reeds I’d surprisingly still got 4ft. The slope ruled out pellets and I caught almost all my fish on maggots, which is the bait I wanted to catch on anyway. I searched up and down in the water to keep odd fish coming. Directly in front was black with little roach. The best spot was 13m towards peg 15 and as far that way as I could push it.

I ended with 30+ F1s and a load of small roach and skimmers plus a 2lb foul-hooked common. A 0.2g rig was best early doors until I thinned out the roach, then I swapped to a lighter 0.1g rig, fishing single and double maggot on a 20 Silverfish Maggot to 0.09mm. I also fished with doubled-up No3 solid elastic through a shorter Double 2 Kit and, although I’m still experimenting, I really like this combo at the moment.

One minor disaster was stupidly knocking off a 1lb+ F1 with my landing net towards the end, which cost me at least one place. It was a kind of decent day’s fishing as at least I had plenty of bites. I just never felt I was in the same race as some of the other pegs on the lake.

Teamwise we also had an average day, but are still hanging onto 3rd spot in the league. Paul Bick had a mare on Extension 38, Joe did well on New 19 but, as expected, most of the anglers on Jennys Lake beat him in that split section. Super sub andy Power won his section off Top 26 – don’t ask me how he managed that from there!

Surely we must be due some flyers over the next few rounds. I’m fed up of saying I’m one off a flyer. I want to be on it!