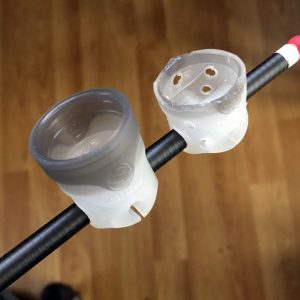 I can’t help tinkering with my tackle. It’s an addiction! I struggle to use anything straight off the shelf. Pole float tips and stems regularly get shortened. Catapult elastics get shortened. Seat box legs get, er, shortened.

The latest thing I’ve been shortening are pole pots. Everything’s suddenly gone into ‘proper’ pellet mode now and I’ve been catching everywhere on expanders over well wetted micros. There’s nowt wrong with the small Guru pots I’ve been using for sprinkling pellets in but the fish are now fighting for the bait and causing more liners than back in the winter, so I’ve been doing better by dumping a controlled amount in and then lowering my hook bait bang veer the top.

Up til now I’ve been using the smallest Preston Cad Pot for this type of feeding but I swapped to a smaller home made ‘Fruit Shoot’ lid pot and found this was better. The smaller pot is easier to pack, easier to empty and importantly encourages you not to overfill it. Yes, you could just use the normal pot and half fill it BUT I find the pellets compress into a correct size of pot easier, and are easier to tap out in a controlled manner. Until you actually try it and compare the two methods it’s difficult to appreciate this subtle yet important difference.

My Fruit Shoot pots are ok but they’re awkward to put on and off with a rig already attached. I do like to swap pots over during a session and so a pot that can I can clip on and off in seconds is much more convenient. As I said, the Guru ones are nice and I have some unaltered ones for dripping bait, but I’ve also butchered a couple so they feed the exact amount of bait I generally want at the moment. That’s 20 to 40 micro pellets. Enough to catch one quick fish at a time.

I’ve also treated myself to a new Dremel 8100 cordless drill after my old basic one gave up the ghost. This baby is bigger and heavier than my old model but you can control the drilling speed easier and it seems great so far. I’ve used it to pop some holes all around the new pots. Until recently I was a bit sceptical about any pots with holes in but now I fully appreciate these holes help to remove any vacuum and encourage the bait to eject easier, both by tapping it out in mid air and and also by dunking the pot in the water.

Modding little pots is such a tiny thing to get animated about, but I love doing this kind of thing. It might not catch me many more fish, but it gives me pleasure knowing I’ve done something that I feel improves the way I fish.

UPDATE: First outing with my new little pots and I used them all day to bag 137lb and 2nd overall at Tunnel Barn!