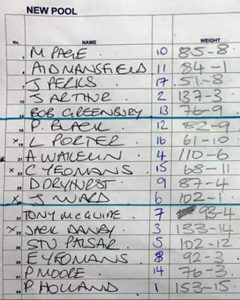 This six-round series kicked off poorly for me and pretty much ruled out my league chances from the off! However, my results steadily improved and a couple of lake 2nds saw me end up 8th, which is much higher than I expected!

Peg 10 on New Pool stuck to my hand for the final round. This is a peg I know really well. It can be a moody winter peg but a great summer draw and with the fish waking up and near gale-force wind hacking towards my bank I had to fancy it.

The headwind wasn’t pleasant, especially when your top kits are flying away and your hat blows off three times! I had a small sheltered section of water slightly to my right where I felt would be my best chance of feeding a maggot shallow swim. Even with a bit of shelter I still had to feed this spot by catapult most of the day rather than by hand. For all my efforts I only had one big F1 there. I think you needed a wider and more sheltered peg for shallow fishing on the day.

At the start I kicked off on a top kit and was catching little ratty F1 stockies. Out to the base of the far shelf and it was the same story. I then pushed up towards the reedsand really tried my best to thin them out on pellets but it was a lost cause. Everyone else on the lake said they had a similar issue, so the stockies had clearly woken up!

For the remainder of the match I felt my best chances of catching a ton were to concentrate down my left and right edges. Eventually the stamp improved and I never looked back. I still caught a few stockies plus some much better fish on pellets and meat. I caught really steady, moving up and down the bank in about 2.5ft of water, as this peg has relatively deep edges for New.

The last 30 minutes were poorest and I’m sure this was due to a few normal carp upsetting the peg. I managed two nice commons and a mirror in that time, however, but it wasn’t the frantic ending I hoped for. They didn’t want loads of bait on the day, just regular small consignments, and I soon got into a rhythm of feeding one side and fishing the other. My modified pots were spot on for this. 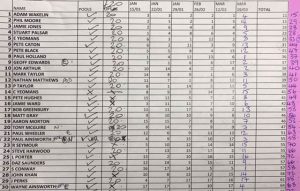 As the scales arrived I really felt I might weigh 150lb+ but that first hour of runt bashing clearly cost me as I tipped 137lb on the scales. That was still enough for 2nd on the lake and 2nd in the match. Paul Holland won with 150lb off a flat calm New 44 on maggot shallow and there was a 132lb off New 33 with a 127lb off Extension – so things are definitely warming up!

It’s always nice to end a league with a good nice pickup!