A Fisho Lake Win At The Barn 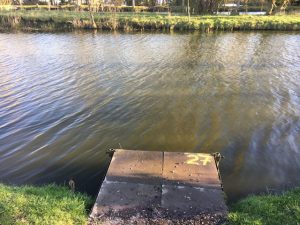 This was a really strange match with an outcome I really didn’t expect. Walking around the lakes in the morning we were  greeted with a biting cold wind blowing a different way to normal (I assume it was an easterly?). Despite the sunny forecast I was sure this wind would have an affect on some of the lakes.

I prayed for a flyer on Club, Canal or Jennys. I dipped the hand into the drawbag and pulled out peg 27 on Extension. I immediately knew it wasn’t going to be a match winning day for me, but I still like the lake and at least I’d have a day’s fishing. I was in good company with Jake Fowles immediately to my left on 26, so he’d have a nice ‘experience’ listening to me chunter to myself, as I normally do while I fish!

It was a really slow start for everyone on the lake. I began on a top kit and pellets hoping for a few early fish but just had two stockies and three or four lightning fast missed bites telling me it wasn’t right. I was quickly out to 14 metres in 3ft of water and waited ages for my first fish, again on expander over a tiny plug of micros. It was a little stocky mirror. Again, not a good sign, as if there were any big resident F1s about I expected one by now.

Two foul-hooked fish in the next two drops, well off the deck and both after a long wait, were also not ideal! Jake was having a similar stuttering start. Interestingly, we were both picking up black muck off the bottom, which is exactly what happened last time I was on this lake. Weird!

I started a new swim for one fish then nothing. A swap to meat on the hook over a tiny pinch of meat and micros brought one nice old F1 and a stocky… then nothing.

A quick look down each edge brought a stockie on each swim then again nothing, so I was soon shipping tight over at 16 metres where it was just over 2ft deep. About five fish came from this spot but it was still really slow and the cross wind was making things really difficult by now.

I’d been lightly feeding maggots shallow from the off and after 90 minutes had a look. This produced just a few small silvers but dropping deeper to 3ft with two whites on the hook produced my one and only F1 up in the water. I decided to up the feed and see what happened. Definitely felt like there was nothing to lose today!

As the halfway stage approached I was struggling to see how I’d catch a run of fish. That’s when I noticed the guy on peg 29 have a few at six metres on the deck. I was reluctant to even set up a rig for this spot as I expected I’d just fish shallow here over my maggots, as previous matches told me I’d have all sorts of problems attempting to fish full depth over loose fed maggots. Plus, plumbing around at the start and the bottom was extremely silty with bubbles coming up wherever I dropped the plummet. Despite this, I popped on a longer 0.10mm hooklength and dropped my top kit rig over the top. A battle scarred 1lb+ F1 came first drop, then a few chunky skimmers before I had my best run of F1s of the day. Although not the 2lb+ Extension residents I was hoping for, they were chunky old fish nonetheless and brought me right up with the pace on the lake.

I fished this spot most of the match after this and surprisingly hardly had any foul-hookers or silly bites. I even managed a bonus 5-6lb mirror, all on double maggot, feeding 50/50 reds and whites. For whatever reason, the fish on this lake definitely wanted to be in the deepest water and hard on the bottom. I still had a few looks down the edge, getting just one lone fish before having to move swim each time. 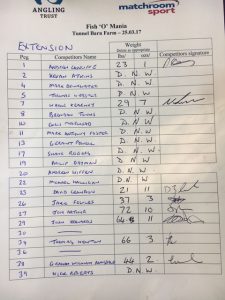 In hindsight I should’ve also fed a pellet swim 3/4 across in 4ft of water as I’m sure I would’ve caught there too. My last few matches on this lake had actually lead me the wrong way in that respect so I should have approached the day with a more open mind from the start. Luckily, I’d seen the errors and made the right changes quick enough and had a good two-hour spell.

That gave me a 72lb total which was surprisingly enough to win the entire lake! Extension had definitely been the worst lake on the day, perhaps because it’s traditionally the clearest one on the complex?

Anyways, I was only 110lb adrift of the winner, who was Paul Blinkhorn with an excellent 180lb from Jennys. Well done that man! Next stop Viaduct Fishery for me. Can I be on Cary or Campbell lakes PLEASE!