I had a lovely day yesterday on the Rolf’s Lake Good Friday Open. It was only my second ever match at Rolfs; the first being many years ago when I had my first ever 200lb+ weight. That was actually on the pellet waggler and so that was the first thing I packed, just in case.

It’s a good job I did as I’d drawn unfancied peg 10 and with nothing showing on the pole and no mugging allowed I had no option than to chuck a small pellet waggler into the middle. My reward was a 19lb mirror and then a foul-hooked 17lb 4oz common. Great fun on 0.18mm!

The fish were very very moody on the day and with people walking mid match it was clearly fishing very hard. Nothing shallow or short so I dropped in down the edge. It looked really inviting but with 3m of floating grass I couldn’t drop a rig where I wanted,  tight to the bank. Instead, I had to fish well away and in about 4ft, which gave me a few issues with foul hookers. I also had to use a 0.4g float with a really thick tip just to see it through all the muck!

I started off on banded 6mm and 8mm pellets, but that brought a few foul hookers and one carp. Swapping to Toss Potting hemp and fishing a big 8mm punch of meat seemed much better and I managed another three carp on this. Red Bungee and 0.20 to a 12 hook seemed best. Strong gear but the fish average 10lb and there’s loads of snags they wanted to get in!

On this match you had to weigh anything over 10lb immediately and return it, so after five hours all I had in my keepnet was a roach and a 7lb carp! However, my other five fish went 78lb on the board. That was enough for 2nd overall behind paste master Malc Doyle. A decent result against the venue regulars and a nice change from F1 bashing. Big kippers and great fun! 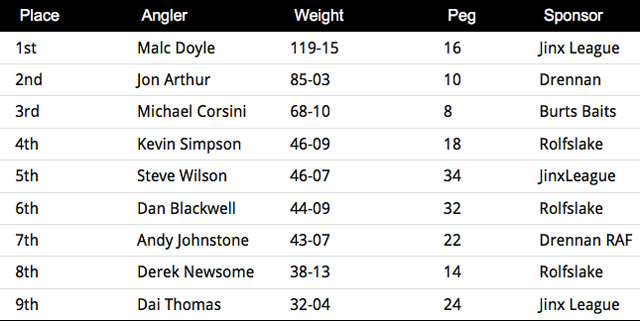