Back On The Big Match Trail 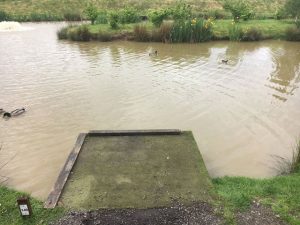 Couple of big matches this week. First was the Golden Reel at Decoy. Drew on Oak and never won a ‘bean’ with 143lb! Fish were really moody. I lost two carp first two drops for a nice start, then the heavens opened and we were treated to a deluge of rain the entire match. Struggled for odd fish but eventually sacked up down the edge on worms and then corn. Some good carp, a couple of big barbel and two huge ide over 2lb apiece.

Disaster struck with 30 mins to go. The thread on the fishery’s landing net came off! No one had a spare and my head was completely frazzled. I had two options. Option 1 was to hurdle 20 poles, get in the van soaking wet and drive back to the HQ for another fishery landing net. I went for Option 2, which saw me have to stand half in the lake with outstretched arms and skilfully shimmy three big carp into a pole-less landing net head – much to my neighbour’s amusement! That catastrophe probably cost me the section, as the corner peg to my right got the envelope with 151lb. Never mind, still a nice day at a nice venue despite the weather and tackle malfunction!

Next up was the Maver Match This at Partridge lakes. There were 89 on it and the talk before the start was that you wanted Spey 2-6 or Covey 4. I pulled out 149 on Covey 6. Despite being an end peg everyone I spoke to turned their noses up and said I still hadn’t got much of a chance!

The lake was solid with fish under the surface as I tackled up, but minutes before the start the rain arrived and that was the end of that. I never had a single fish shallow, or full-depth underneath it, and just one tiny F1 and two gudgeon down the edges. Apart from a few early fish close in on pellets, I caught everything against the island on maggots and casters. Definitely not what I expected! Surprisingly, I only had a handful of F1s all day, too, and the rest were scrappy little commons and mirrors that were a bugger to get their heads up.

My 87lb 3oz was enough to win the lake and the £70 section prize and as 87lb 5oz was 6th overall I assume I was 7th in the match! Well done to all the framers who, as expected, all caught shallow.

Another day of drying off kit, DIY and decorating today…