Tough day for most of us at Barston on the Golden Reel with the fish post spawning. It blew a hoolie towards the end peg in the 60s most of the day, so I assume that’s where all the weights came from! 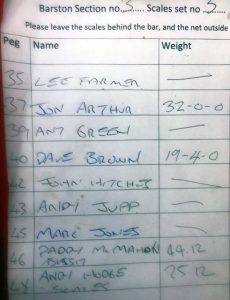 I drew 37 on the end of the island which is possibly the worst island in the country as, for some reason, nothing of any note lives over there! I managed four carp for 21lb and 11lb of skimmers, all on the Method, for 32lb and 2nd in section. I lost a couple on underwater snags and people’s tethered line and even reeled in someone else’s feeder with a big ball of line. Not a single bite on pole or bomb either. The guy that pipped me had three proper uns for 38lb in his 44lb catch!

My nearside margin was absolutely covered in fish spawn, some of which was several inches above the water! It was bizarre that fed close in, not even a silverfish.

I think we sadly caught the place at the worst possible time, post spawning, but nice to have a day chucking a feeder again.