Three Days At The Acres 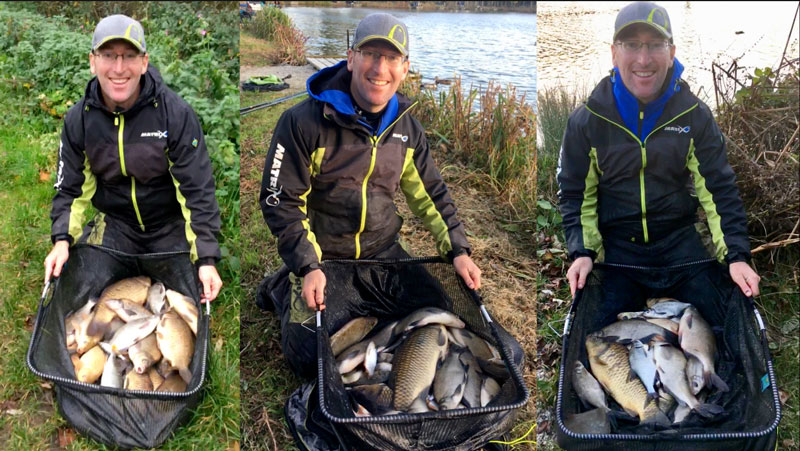 Just had three nice days down at White Acres for a winter mini festival. Despite no rain and decent temperatures the fishing was surprisingly hard, but still some nice fish to be caught if you drew on a few.

Peg 20 on Trelawney was my destination for Day 1 and I wasn’t too optimistic. It’s around a corner all by itself and can be a real feast or famine draw. Really struggled for anything the first half of the match, but finally found some skimmers and small F1s down the edge on maggots, plus two proper ones on a short line.

I felt I’d done all I could and put 43lb on the scales. Well behind Steve Hemingray who had 68lb off peg 26, but a comfortable 2nd in section, so not a disaster.

To put the peg into perspective, Alan Scotthorne and Des Shipp both drew it over the next two days and only beat one or two off it. The fishing obviously got worse each day, and proves to me that the fish would rather be in the wider pegs in the main lake than stuck down a narrow corner at this time of year.

Oh, I nearly forgot Richard the rat who sat by my side watching me half the day. I gave it a bonk on the head a couple of times with my pole pot to shoo it away and it just squeeked and carried on trying to stare me out. Second most stubborn Richard the rat I’ve ever met!

Next day I was on a very windy peg 28 on Pollawyn. All I could muster was a very occasional skimmer while they seemed to be catching a lot more to my left. I felt I was well behind so made a bold gamble and started loose feeding casters to try and catch shallow. It was hard work with the wind whooshing all over the place and the roach were tiny, but I persevered in the hope that a big F1 would appear. Just as I started to think I was wasting my time I had two for a good 7lb. I soldiered on, foul-hooking something big and losing another.

My gamble nearly paid off as I ended up with 25lb 10oz, just ouncing Dale Shepherd next door, but 2oz behind Dean Barlow on peg 26. Three 25lbs all in a row! Derek Hammond won the section and lake with 31lb off peg 16, so I was 3rd in section.

Third and final day I drew 17 on Jennys. Despite FOUR end pegs in my six-man section I somehow never drew one! The wind and undertow was tramming through and I had to fish a 0.8g Malman Dolphin in 4ft of water to gain any sort of presentation. Again a really poor start with just one skimmer in the first hour and nothing on the waggler, but I ended up catching a few late at 8m, plus an F1 (in the eyeball!) and some little F1s.

I ended up with 18lb for another 3rd in section. Dean Barlow won with 24lb on the opposite bank and Derek Hammond had 23lb off peg 15. Both ‘downstream’ end pegs if that made a difference or not?

On the tackle front my best floats were Malman Secrets in 4×10 to 4×14 when the conditions were good and Malman Dolphins from 0.2g to 0.8g. I hadn’t tied many of the latter up but the compact shape, hollow tip and titanium wire stem was ideal in the turbulent conditions.

Line was 0.14mm Matrix Power Micron to 0.10mm and 0.09mm hooklengths of the same material and a mixture of Silver Baggers, F1 and prototype hooks in sizes 18 and 16. Once again, orange 6-8 Slik elastic was amazing for skimmers, roach and F1s (and nuisance carp to 10lb!), with a solid Stay-Fresh no5 solid when I wanted something even lighter.

I also really put my new MTX4 pole to the test against the wind and could still hold on to 13 metres while others daren’t! I’d also never used short No3s until Saturday, but can see them being really useful whenever a rig is set slightly deeper than your top kit, such as on the deep pegs on Pollawyn.

Groundbait was the ever-faithful Dynamite Milled Expander, Green and Black Swim Stim with a bit of Canal & Lake added on the last day as it was fishing so hard.

Highlight of the week was on Trelawney the afternoon before the festival. Had a few hours practice and snared the biggest F1 I’ve ever caught. The photo doesn’t do it justice but it was as wide as it was long and easily over 6lb. Oh, and hiding in Grant Albutt’s van and scaring the poop out of him was also quite funny!
Lowlight of the event was the amount of leaves we all caught on the bottom! Never hooked so many. You’d get a good bite, strike and up would pop yet another bloody leaf flapping in the wind! Everyone suffered with it. I must’ve caught enough leaves and branches to make my own tree!

Thanks to Glenn Lawrence and Neil Mallinson for being great lodge mates. Also to Gary Barclay, Clint Elliott and the fishery team for running a great event as always. Finally, a big well done to Steve Hemmingray for winning it and runner-up Andy Power. The only two anglers with three section wins.

Can’t wait to get back there in a week’s time for a full week of F1 and silverfish bagging… I hope!