Team 2nd With One Round To Go! 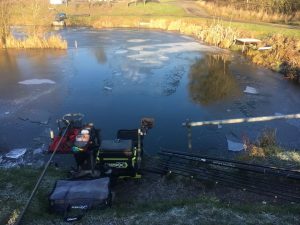 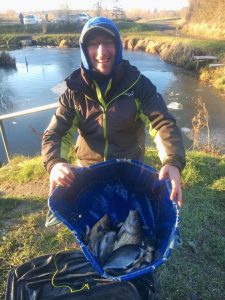 Today was the penultimate round of the Tunnel Barn Teams Of 4 with most lakes properly frozen. I drew peg 13 on Club Pool which can be a fantastic peg, but can also be feast or famine this time of year.

Well it certainly wasn’t a feast today as it took four hours to catch my first F1! I’ve had all my fish on maggot at 13m towards peg 12A and ended up beating almost everyone down my end of the lake with just 15lb 13oz. The four pegs up the other end have all beaten me and Danny Hallam has done well to win the lake with 64lb from peg 21. They could actually see the carp under the ice up that end!

To give you some idea of just how hard our end’s been I’ve had Adam Wakelin next door on peg 15 and he’s not had a single F1! As expected, the split section on Jennys Pool has dominated, so I’ve come 6th on my lake but 14th in my 22.

Teamwise, we’ve done average, but so have most of the other teams near the top. Unbelievably, Team Guru have had a nightmare result, scoring just 22 points, so my Team Dynamite quartet have leapfrogged them into 2nd place by just two points with one more round to go. It’s all to play for next week and, as today’s proved, anything could happen!