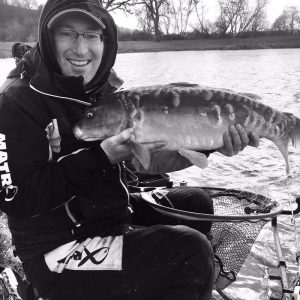 With winter leagues and other commitments now behind me I can look forward to next weekend’s Golden Rod Final. This is a feeder-only two-day event with £12,000 to the winner, so it’s quite a big deal!

I qualified at Decoy Lakes with a lovely catch of fish on the maggot feeder in Arctic conditions. The final at Larford will be a completely different ball game. I think it will be Method Feeders and open end feeders all the way!

I’ve had three visits now and might try and squeeze another in between now and the Final. I’ve not been to Larford for six months, so I’m glad I went and watched the final Golden Rod qualifier last weekend. I wouldn’t say I learnt lots of new things, but it really helped to consolidate what I already felt I knew. It also gave me a fantastic overall picture of the entire complex, the weights, common tactics, fish sizes, distances and feeding times.

I don’t want to over-practice and go in with rigid plans or thoughts. I don’t think that’s possible with 60 pegs and three lakes (Match, Arena and Speci) and areas that are very different from each other. Instead, I’ll have a loose and flexible gameplan depending on where exactly I draw. 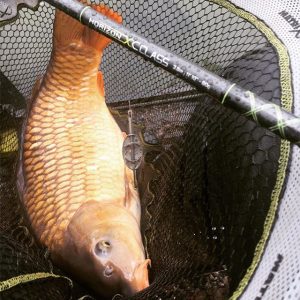 The event is based on 10-peg sections, rather than weight, so we’ll all be praying for a top three on Day One. Obviously a section win would be amazing but I think you’ll still be in the race with three points. Less than that and I think you’re fishing for a section prize (and pride!) on Day Two.

I went Thursday in horrific conditions and still had a great learning day, catching big carp, bream and skimmers on the Speci Lake. I then went yesterday and decided to skip the open match on there and instead have three hours on Arena just to familiarise myself with what was in there, then three hours on a flyer on Match Lake, hoping to be confident ‘when’ I draw it on the big day!

I think not fishing the open proved a very wise decision as it fished rock hard for most and wasn’t pegged anything like how the Final will be. I don’t think there was much to learn that I couldn’t glean just from watching – plus, I didn’t want to undo everything I gained from a couple of great confidence boosting sessions.

I know things are much easier when you’re ‘pleasure fishing’ but it’s helped me go into the big day with a really positive frame of mind and the knowledge that if I draw half decent I’ve got a chance of a great result. It would certainly be a fantastic competition to win!