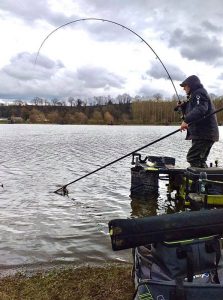 I’ve just come back from the two-day Golden Rod Final at Larford Lakes held at the weekend.

Day 1 I drew peg 10 on Match Lake and had a good start catching a run of F1s by plopping a little Open Alloy Feeder short with fishery micros and a 5mm yellow Washter. The lake’s F1s have taken a battering recently so they soon shut up shop and everyone seemed to struggle on our bank after the first hour.

I eventually managed four carp and an F1 in the middle of the lake on 7mm Washters. Sadly they weren’t quite big enough as I totalled 40lb, with a 41lb and a 43lb on our bank in a really close battle! However, we were all eclipsed by the burr bank pegs opposite who all had 50-70lb+ of big lumps late. The exact same thing happened on Day 2 with world class anglers faring no better from our pegs, so definitely not a good draw in hindsight. 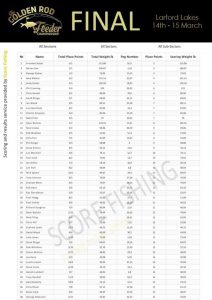 Day 2 I was on peg 9 on the Speci Lake. I decided to fish a short Method plop all day for bream and skimmers with the outside hope that a bonus carp would arrive, but only two got caught in our 11-man section. My 10 fish went 18lb for 3rd in section, narrowly beaten by a 19lb of skimmers next door and a carp-assisted 20lb off the opposite bank. I was a bit gutted as I somehow pulled out of three fish. Once again the faithful 7mm Washters did the damage. Strangely not a bite on corn and only one small fish on dead maggots. The whole lake switched off today, just like last year’s Final on Day 2, but it is only March I suppose…

I ended up 21st out of 66 anglers. An ok result off two very average pegs, but looking back I could’ve scraped into the top 10 prizes with a bit more luck.

A big well done to Przemek Solski on winning the £10k jackpot with an excellent two-day performance and of course to Phil Briscoe and his team for keeping the event going after such serious flooding.

It’s been nice sitting on my hands watching a quivertip for two days, but I’m itching to get the float gear and catapults back out now! 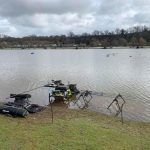 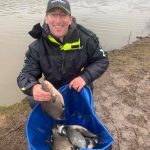 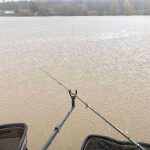 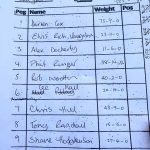 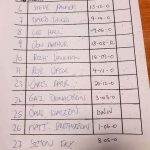