Top 10 On The Thames 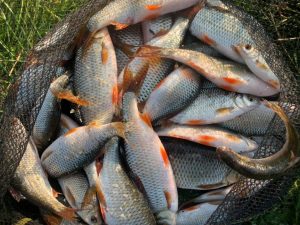 Finally got a bit of time to catch up on a fantastic Thames Festival I’ve just fished. Held over three days and with 72 anglers at Sandford, Culham and Abingdon. This was actually my first river matches of the season, so I was immediately up against it and it took a while swapping all my carp gear over, remembering to cook up some hemp and leave the pellets behind!

This year has to be the strongest field of anglers I’ve ever seen on the event, with a who’s who of river anglers… plus one commercial noddy trying to find his roach gear! The three 24-man zones were drawn live on Facebook on the Monday and I wasn’t surprised to find myself in the obligatory zone of death. Half of them seemed to be internationals and the other half were river or venue experts. Standard stuff. Game on! 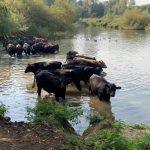 I wanted a nice draw on Day 1 and got it in the shape of peg 7 at Sandford. I was told pegs 1 to 3 would be the ones to watch, but mine was also very good with plenty of room and a cattle drink below me… and 30 bullocks cooling off in the scorching heat! I’ve never seen this stretch before but it’s on the Littlemore ticket and looks absolutely brilliant with a bit of pace and ideal for float fishing. For company in the section I’d got Steve Townsend immediately below, Colin Perry, Steve Sanders, Dave Kirk and Alex Clements all in my section upstream amongst others. This wasn’t going to be easy! 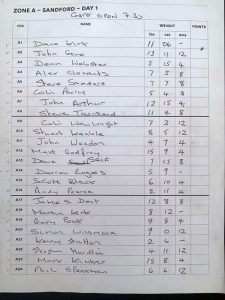 I set up a mountain of tackle, including two waggler rods, long whips, perch gear and a nice array of pole tops to cover all the bases. I didn’t want to feed the waggler until I’d sussed out if I could catch well enough on the pole. I felt it was the right decision as I ended up having a cracking day’s fishing with hemp and tares for around 150 to 160 roach and 12lb 15oz. That was enough for 4th in the 24 pegs and 2nd in section behind John Gore’s impressive 13lb+ off peg 2, who apparently caught over 400 fish. A nice start!

Day 2 and I felt I was the right end of my section on peg 23. Once again I’d got Steve Townsend below me, this time on the end peg, and the likes of Gary Pook and Matt Godfrey in the section too. The river looked really clear and I was told there were no bleak caught in this area the day before. It also plumbed up really badly and I spent ages trying to find a clean area that wasn’t bumpy or sloping too much. I settled on a 14.5m swim and cupped in eight balls of groundbait at the start here and four short. One roach and a gudgeon was all I caught short, so I spent the rest of the day on the 14.5m swim. 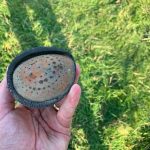 It took ages for the fish to arrive but I had a great second hour catching roach averaging 3oz on casters. After that it just switched off and I spent the last two hours scratching around with a couple of light rigs and pinkies to keep putting an odd fish in the net. The fish were hard on the bottom today. Oh, and I somehow caught a lovely watering can nozzle on the deck at 14.5m. It was a great bite too! 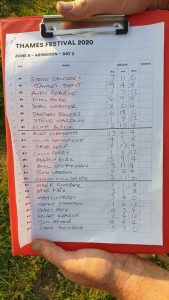 To my relief the section had fished really hard and my 8lb 4oz was enough for a comfortable section win and 3rd in the 24-man zone. Going in to the last day there were three anglers on 2pts and three of us on 3pts, so I was praying for a good draw at Culham the next day.

When my Day 3 draw was finally posted on Facebook I was really disappointed! All the anglers above me seemed to be on decent pegs whereas I’d got peg 17 at Culham, which is in the dreaded wood and up against all the guys pegged in the reeds. The previous day’s match winner had come off the downstream peg and I felt the last four pegs would be very hard to beat, especially with James Dent and Simon Willsmore sitting there amongst others. 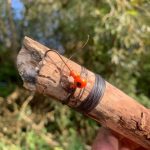 By the third day we all knew the fishing would be difficult as the river was still clear and yet more sunny weather. I chose to feed a long line at 14.5m, a 9m swim, a chopped worm swim and clipped up a feeder for across. I also found a makeshift rod/stick at my peg in the morning, together with 10lb tow rope and a jig head, so I could always try that if I was strugglng!

My banker swim was the long pole which plumbed up much nicer today. I knew I needed to make it work from the off, so I balled it in with a cloudy mix and then cupped in four feed-rich balls. I went straight on it and to my relief there were some really nice roach up to 8oz, but bites were really iffy and I had to wait for each one.

After the first 90 minutes the river just switched off and I ended up fishing all depths for some big bleak. Meanwhile Dave Kirk below me was admitting to 15 big roach averaging three to the pound. I tried all depths and feeding to try and draw some roach back but even the bleak had completely deserted me with two hours to go. I managed one small perch on the feeder before two anglers turned up opposite, but I just never felt right over there anyway. After reballing it in desperation, the last fish I hooked felt like a good perch but it fell off the hook on the way back. 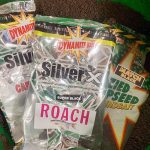 I assumed they’d all still caught in the fancied reedbeds at the far end of my section, but it was much closer than I thought. Simon Willmsore had a late run of fish to win the section with 8lb, Dave Kirk’s 25 fish went 7lb, the end peg had 6lb 1oz 8 drms, James Dent next to him had 6lb exactly and I had… 5lb 14oz 8drms! Just 2.5oz off a 3rd in section which I would have definitely taken at the start!

I assumed my 5th in section had cost me a place in the top-10 prizes and as there was no presentation because of social distancing I didn’t know the final results or how anyone else had done until much later in the evening. To my amazement I’d done just enough to make the top 10, just pipping Matt Godfrey, Bradley Gibbons and Alex Clements on weight! Really happy with that… but just another 2.5oz on day 3 and I would have been 4th overall! Still not a bad effort for someone who’s just been fishing commercials since lockdown and great to be back on the river! 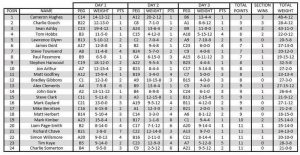 My groundbait mix all three days was Dynamite Frenzied Hemp Match Black, Black Roach plus a bit of Canal & Lake and brown crumb and ‘Terre d’Arthur’ soil. Elastic was 6-8 Slik through two sections on bagging rigs and solid 4 Matrix through 1.5 sections for scratching around. My MTX4 pole was stunning at long length and even better once I’d given it a much needed polish with baby wipes for improved shipping speed!

Congratulations on Cam for the win and I must also say a huge well done to festival organisers Darren Rogers, Colin Nicholson and Tim Nix for keeping the event going, running the event so professionally and with fabulous parking arrangements, a well organised weighing team and huge care and attention to current safety guidelines for us all during these strange times.

Next up for me is a feeder-only at Larford then the UK Champs at Barston. Time to swap the gear back over to the dark side. To me it’s ALL ‘proper fishing’ though! 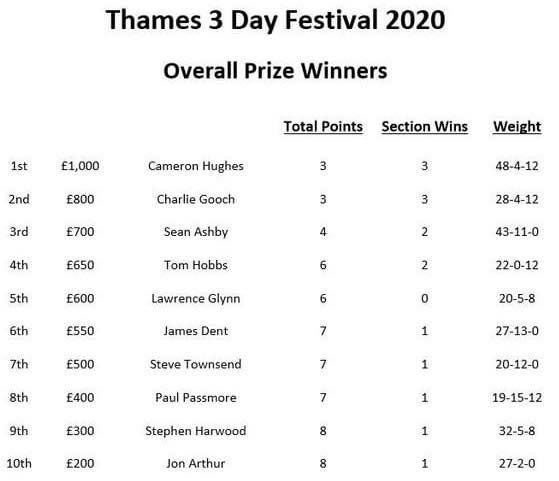