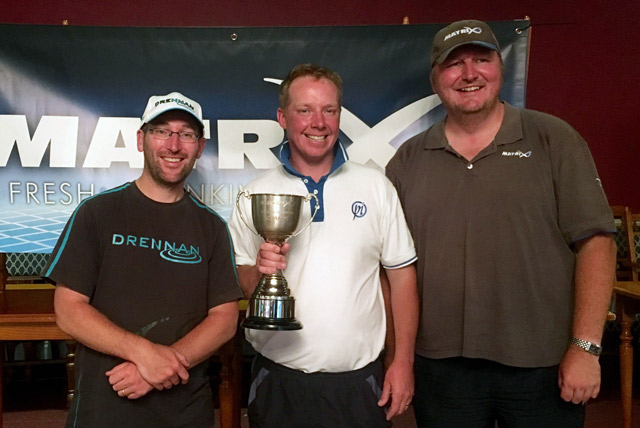 This was held at Makins Fishery and with the whole of Phase 2 used for 50 competitors there was only one ‘cosy’ section. This was five pegs on Little Reptile, which is of course where I drew. I have only ever seen this tiny lake with three anglers pegged on it, but the decision to put five on there turned out to be justified as there was little to separate the weights. It also meant you could see everyone else in your section and gauge exactly how you were doing.

On what turned out to be a hot, sunny and difficult day for most I managed to just win the section with around 40lb to set myself up nicely for the rest of the series. I caught a few carp across to the island on maggots over groundbait, mugged a few on meat shallow and bagged around 10lb of silverfish on worms down the middle to help me just edge it and take maximum points. Looking back, it was that extra boost of silverfish I caught in the quieter periods that swung the verdict my way. 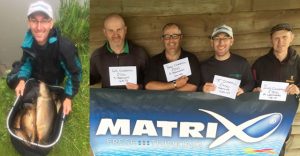 This second round was at Packington Fishery on Big Gearys and Molands lakes. It was another iffy day fishingwise as the usually reliable F1s seemed to switch off. Thankfully I drew more of a proper carp area in the 30s on the back straight of Molands and had a great day’s fishing.

After mugging a few early cruisers off the top I settled down for the rest of the day on a little 1oz Method Feeder, cast as tight to the far bank foliage as I could get. The result was 100lb 7oz for a section win… and a match win. It was one of those rare easy days when everything I did seemed to work.

This was where my wheels sadly fell off! I drew peg 9 on Lambsdown at Meadowlands Fishery, which I gather is the deepest peg on the lake. Despite fancying it and having plenty of room I really struggled to string any bites together. I had one early carp, a few skimmers short and a few late edge dwellers but lots of inactive spells in between. I ended with 86lb (I think) and four points. Not a bad weight but still nowhere near the 120lb I needed to win. Thankfully the fifth guy in the section never turned up else he would probably have beat me too!

I am usually very self critical but looking back on this match I still don’t quite know what I did so badly wrong while everyone around me was getting bites and hooking or foul-hooking plenty of fish. I perhaps tried too hard to catch on the pellet waggler and maybe should have tried experimenting with hook baits more on the bomb? Perhaps I should have fished finer? Or much further out? I know I wasn’t particularly match fit for this round but I still tried my hardest. I probably tried too hard to catch, if that makes sense? Oh well. You can’t win ’em all…

The final round was last weekend at Barston Lakes. A few other anglers had also dipped on Round 3, so the league table was now very close. It still looked difficult to win overall (especially after league leader Adam Wakelin drew peg 26!) but a 2nd or 3rd in the league was well within many people’s reach.

I pulled out peg 117 on the less windy roadside bank and was happy to have avoided the much peggier 120s section to my right. However, with the likes of Adam Rooney, Paul Holland and Carl Williams in my five pegs it was not going to be an easy ride!

Once again the venue fished below par after heavy rain had chilled the water. That seemed to put the resident carp and F1s right off. Thankfully I managed to snare a few skimmers and two F1s for a section winning 62lb 14oz. To my surprise this was also just enough for 2nd in the match, which helped me end up 2nd overall in the league. An extra surprise was that the prize pot had been doubled up, so I had a rather nice pay day!

Well done to Adam Wakelin winning the league overall. Also to Wayne Sharman from Lanes Tackle who does a great job running this event. It was very fitting that he won the final round with 73lb and got a well-earned place on the podium.