If You Can’t Be Good, Be Lucky! 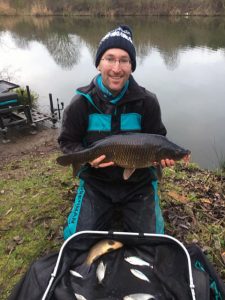 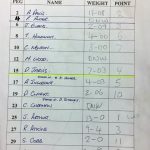 With Tunnel Barn fishing below par the previous day I was really expecting Packington to be even harder and I wasn’t wrong! I was scheduled for the low numbers on Molands and I finally (whoop!) managed a very good peg in the shape of peg 25.

To cut a long story short, I chucked a bomb and bread around for the first 40 minutes for nothing before nicking a couple of silvers at 14.5 metres to avoid a very possible blank. A switch to a maggot feeder and a tiny little pellet feeder cast around the peg was equally unproductive with just one small F1 to show for my efforts – I was probably winning the lake with that!

I wanted to set a waggler up at the start but as this peg is one of the widest on the lake I decided not to bother, however, I was soon off my box and tackling up a 13ft Acolyte Ultra with a 5g waggler after two dismal hours with absolutely no one catching a thing. About 15 casts later with double dead red maggot on the hook I finally had a good bite and struck into a proper lump. I gingerly played it all the way to the net and scooped it up – all double figures of it!

That was when I asked myself why on earth was I fishing with a 0.10mm Supplex Fluorocarbon hooklink with fish like that as likely as anything? With mega points now secured I swapped to a heavier trace but sadly couldn’t tempt any more. A slight breeze picked up and so I stuck to the bomb and bread the last hour for zilch. The only activity we saw was a great big pike striking several times all over the lake. I’m sure the pike have knackered the once-great skimmer fishing, and you also don’t seem to see many tench or crucians any more. I’d be hiding too with such clear water and big predators about!

At the weigh in it was clear just how hard the entire place had fished. I won the 15-peg section with 13lb and was actually 2nd on the entire lake, with just 17lb winning it. If you can’t be good, be lucky! I’d finally got some decent points in the bag. However, I have to miss a couple of rounds now so I can’t see me threatening anyone in the leaderboard stakes.