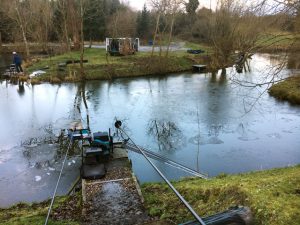 Oh dear! After Joe Carass made a fantastic team draw for us on Round 6 we didn’t hesitate to bestow him the drawing honours for Round 7. It’s fair to say he has now been banned from doing team draws indefinitely! How else can you explain Jamie Hughes being handed possibly the worst peg ever dug at Tunnel Barn in the shape of peg 7 on High Pool?! Jamie has NEVER seen a bad peg before and was clearly shell shocked when that was handed to him. We all assumed they must’ve restocked the place the night before and that’s the peg they dumped them in. Er… no! He limped back with 4lb, which actually still beat five or six on the lake. That’s a good indicator of how dire the place fished for a lot of anglers as many failed to put double figures on the scales.

Joe himself also wasn’t happy when he drew himself peg 1 on New Pool. This can be a decent peg but at the moment there just isn’t a head of feeding fish up that end of the lake. He ended up with 4lb. Paul Bick was in a similar situation on Extension 33, but actually found a few fish for very good lake points.

Unusually, I was on our best peg on paper in the shape of Top 8, although by no means a run-to draw. The previous week all the weights, including Jamie’s match winning weight, came from the main bowl to my left. Today was no different! In fact, I think four of the top six framers came from those pegs, so I was already up against it.

Oh, did I mention the fact that my narrow bottle neck was the only peg on the lake covered in proper ice in the morning? There was a bit of slush in front of the adjacent pegs whereas I did well not to break my landing net handle and carp pole trying to saw my way through the stuff. I eventually made three channels which probably didn’t do the peg any favours. I made two channels in front of me and one down to the narrow channel to my right where there is sometimes a pocket of fish hiding. I figured the slushier ice would eventually melt to my left so I left that area completely untouched at the start. In fact most of the ice began to melt away after 90 minutes when it began to rain. I then had a lovely time with floating icebergs! Before this I’d managed five F1s, all from one swim with pinkies and a bit of groundbait. Nothing on a neat maggot line. Nothing on pellets. Once the ice was half melted I spent the best part of two hours biteless while everyone continued catching to my left.

Eventually I managed another late run of fish down the middle to end up on 14 fish, which weighed 18lb. All on double pinkie in 3.5ft, which was the deepest water I had, fishing a light 0.1g rig. No silvers at all and I don’t think I lost a fish. I’m not 100% sure where that put me in the section but my guess is about 9th or 10th in the 26-peg zone.

Teamwise we ended up with a disastrous 44 pointer and thus dropped to 4th in the league. We now need a mega draw next round to try and make amends. I think it’s got to be my turn to dust off the old faithful drawing arm!