Tough Fishing On The Daiwa Masters 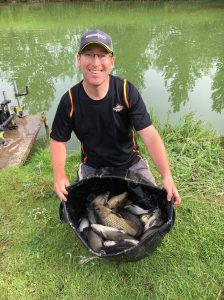 I’ve been on the Daiwa Pole Fishing Masters at Tunnel Barn the last three days. It’s fished really moody by Tunnel’s standards with the fish being really difficult to catch on most of the lakes, but it’s been quite interesting and I’ve learnt a few things for the memory banks.

Day 1 got off to a terrible start. No complaints about my peg as it was a corner end peg in the shape of Canal 24, but the scum was down the other end in the morning and one fish in the first 30 minutes got me thinking it could be a struggle! I’ve fished a really scrappy match and not settled anywhere and come away really disappointed with 82lb and 6 points with the lake being won by Matty Bingham with 165lb from peg 11, which is the furthest peg away from mine! Looking back I pinned too much faith in catching shallow and down the edges. I know I should’ve caught 100lb, but that would’ve only got me another point. So already it felt like my festival was over and I went home feeling really gutted. Oh and the next day the scum and wind was now blowing in this peg and it won the lake, ho hum! And double oh, why did I pack my rods and feeders for this pole-only event!? 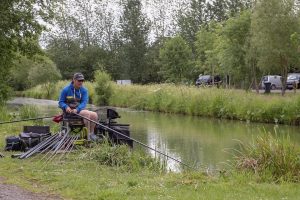 Day 2 I was on peg 13 on Top Pool. A fair peg in one of the tougher sections. There was very little chance of framing from this area so I just plugged away on maggots and casters all day for a really busy and enjoyable match. I caught loads of fish of all sizes to put a hard-earned 87lb on the scales. A nice battle with Ryan Lidgard next door and Kristian Jones opposite, but Ryan snared two bonus carp for 15lb in the last 10 minutes and pipped me into 2nd by 5lb. How dare he! 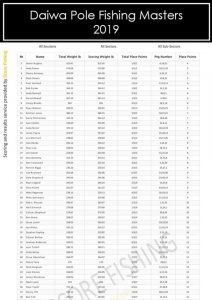 Day 3 and Extension 25 was my home. I really like this area and was quietly confident. However, the lake definitely showed signs of being hammered. I’ve only managed three fish shallow, a few tight across at 16m and the rest down the edges, including loads of flying skimmers. My 73lb earnt me another 2nd with Dave James winning it with 90lb. I actually thought I’d got closer to that, so those skimmers were sadly a bit hollow, but still quite nice to catch!

My 6th and two 2nds got me 10 points and 34th out of 96, so I clawed my way back up the board, but you needed 7 points to make the top 10. It was surprising how many big names ended up a lot lower down the table than me, which highlights just how difficult it had been in areas. Well done to the ever-consistent Jamie Hughes on the win. At this rate he’ll soon complete fishing and take up something a little more challenging!