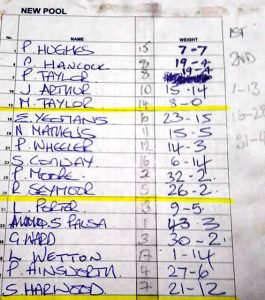 I would normally fancy peg 10 on New Pool for a few fish, but was a bit unsure when I pulled it out for Round 1 of the Individual Winter League. Frankie Gianoncelli only managed 10lb off it the previous day and the whole lake was fishing below par. After 2.5 hours I’d missed one fast bite and then caught a gudgeon. Oh dear!

I never had a bite anywhere to my left where there’s a nice looking aerator, but I figured the narrowness of the peg, clear water and previous day’s melted ice had probably knackered that part of the swim up.

Finally, however, I managed a run of fish at 13 metres towards peg 7, which is the furthest you can realistically push things before you’re actually in his peg. My favourite double pinkie combo let me down today as all my fish were on a single maggot, just dripping three or four and waiting with a light rig. Simple stuff and I wish I’d just fished that way all day and just ‘garden gnomed’ it rather than trying all over the peg to find non-existent fish. I also managed two F1s and two skimmers in the last hour at 7m, bumping just two fish all day.

I ended up with eight F1s in total, plus those two skimmers and Gary the gudgeon for 15lb 14oz. Mark Taylor on 13 had 8lb and his dad to my right on 7 had 19lb. Stu Palser comfortably won the lake with 40lb off peg 33 and most of the weights seemed to come from that area of the lake. I think to catch on this lake at the moment you need some width and some room where the F1s are balling up between pegs.

It’s fair to say I’m not setting any fires alight at the Barn lately. I’m having a days fishing at least, but not really worrying any of the framers. I’m possibly trying too hard at times? I also think I’m taking too long to eventually fish the areas where I expect to catch. I’ve always tried to rest a banker area until the latter part of a match, but lately with things so hard I’m not sure that’s the right way to go.

As frustrating as this style of fishing has been for me lately I still find it intriguing and it certainly gets you thinking. However, I’m beginning to wonder why I can only catch when I fish and feed all nice and delicately when others I know are fishing far cruder and catching just as many fish, if not more! The never ending puzzle of F1 fishing continues…