All fished out after a very busy week! Started off Wednesday with Round 1 of the UK Champs. Disastrous start with 90lb for last in the 6-man section off a peg I fancied, but feared the worst when I saw the wind chucking down the other end. Struggled for bites on everything, fished too positive and just lost my way. Came away absolutely gutted. ? Next! 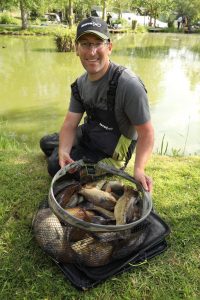 Round 1 of the Catch More Media league got off to a much nicer start at Tunnel Barn Farm. Ended up 2nd on Extension and 3rd overall with 123lb with Ben Townsend winning opposite me with 138lb. We both drew well on paper and a few empty pegs helped the top four on our lake. I caught best on casters shallow and could’ve had more if I hadn’t tried to catch on maggots down the edges as it just wasn’t right on the day. As this is a weight-based competition it was a really positive start. ? Next round’s at Decoy Lakes. 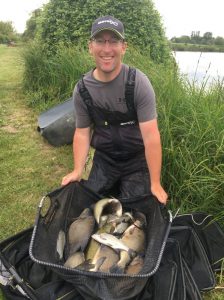 Back to the Glebe on Saturday for the Match This qualifier. I drew a very average Peg 15 on Lake 1 with every peg in and was 2nd in section with 54lb with Steve Openshaw winning it with 61lb. I caught four carp early on a groundbait feeder, Swim Swim Method Mix and dead maggots and four in the last 15 minutes down the edge on worm over Dynamite XL micros and Amino Pellet Soak, plus 20lb of silvers, including some big old gnarly bream, a tench and a crucian, which was nice. Actually enjoyed this match and had some great banter with Steve and Terry Winstone. Fair play to Shaun Woodward winning with over 200lb off an unfancied peg on Lake 4 of all places, and not an end peg either. ? 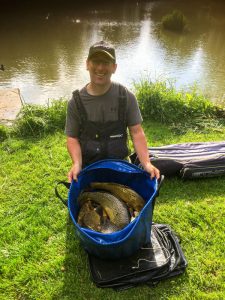 Rounding off the week was Round 1 of the Matrix Commercial Champs held on Phase 2 at ‘moody’ Makins. I drew a nice peg 13 on a generously pegged Reptile with Pete Caton and Wayne Sharman either side. Wind our way, scum on the top, a few cruisers and fishing 12 til 5. Surely 100lb was on the cards? Oh no it wasn’t as it fished shocking! Just one mugger (lost three!), four carp and a bream fishing long and seven carp short. First time I’ve ever fished my Matrix MTX4 pole at 17.5m and it was brilliant. ? I’ve had some serious carp tourettes at times(!) but somehow still won the lake with 56lb. More good banter and got some stick for admitting to 35lb at the scales ??! The top three all came off Lagoon, topped by Steve Daley with the only 100lb bag. Nice to get off the blocks with a section win. Next round’s at Weston Pools.