7th On The Makins Fisho 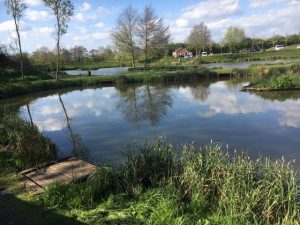 For those who were getting concerned, my end peg drawing arm finally reappeared today on the Fisho qualifier at Makins! I was starting to worry it’d gone for good. Sadly not the lake, end peg or Phase I really wanted, but it’s a start!

135 anglers fished (and 15 no shows!) ‘interestingly’ pegged across Phase 1 and Phase 2. I had a nice day on Lagoon 25, catching a dozen or so carp, three cracking little tench and two skimmers, fishing towards the island and down the edge. Few early on pellets, then a couple on corn and the rest on maggots. Only one fish in the last hour though, which was disappointing. Wind blowing the opposite way probably didn’t help. 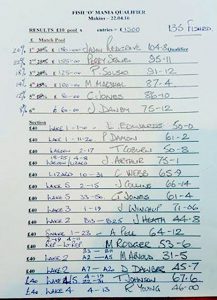 My 75lb 1oz was enough to win the lake, come 2nd on Phase 2 and put me 7th overall. Typically, they paid the top six… doh!

As most predicted, Phase 1 and Lake 1 was the place to be, but with only 104lb winning it wasn’t such a foregone conclusion. Well done Jase Redgrave on the win. A top lad and really chuffed for him.

Gutted I ran out of time at the start as it would’ve made a lovely film fighting those mental Makins carp! Maybe next time…

Best rig was a 0.2g AS4 on 0.18m Supplex to a 0.16mm hooklength and a 16 Wide Gape Pellet. I also used pink Bungee through a Margin Kit which was powerful stuff but starts off soft and felt spot on for subduing these wild creatures.