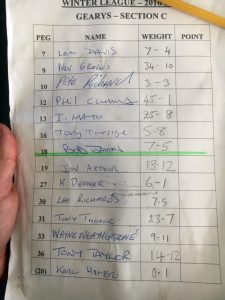 Where’s all the water gone? That was what I was asking myself after setting up on Big Gearys peg 19 for Rd1 of the Packington Winter League!

This is a really good summer peg and often has its day in winter, but with a cold snap, no wind and water levels really down after having no rain for yonks it looked devoid as I set up. You could see fish rolling the opposite side of the island, though, and, just as I suspected, all the fish seem to have buggered off into the deeps towards the ‘high bank’. That’s where all the top weights came from. I still managed a reasonable 6th on the lake with a whopping 13lb 12oz.

That included a 7lb carp on the bomb with 40 mins to go, which must’ve got lost. I could definitely sense one was in the area just before I had it. With that in the bag I sat on it the rest of the match hoping for another pull without so much as a tremble.

I added 6lb of skimmers on the long pole, alternating between two swims at 14m. It was only 2ft at the most here and I could only catch one fish off each swim before it needed resting. Worm heads and dead reds were best, but the bites were really tentative and nothing like the day before. I tried feeding one swim positively and one swim really negative but both were the same.

The best thing I did was get up and swap kits to lighter No5 elastic just to ensure I got everything I hooked in.