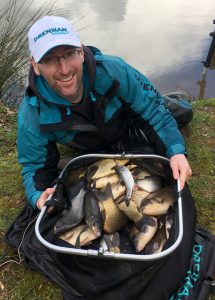 Spring must be upon us as I can finally feed some bait AND catch a few fish! I go through the same lean spell every winter then, just as things begin to warm up, I seem to hit a run of form. This year has been no different. Team commitments meant I sadly had to miss the last three rounds of this league, so I was well out of the running and also out of touch with the venue’s moods. That didn’t matter, as my rotation meant I was on Siblings A and B, which I’d never ever fished before anyway!

I found myself drawn on peg 5 on Siblings A and we all had loads of room, so I quite fancied it. I went with a very straightforward pellet and maggot approach and conveniently managed to use my rigs from the previous day! I kicked off short on pellets in 4ft of water for just one rudd. Yes a rudd on pellets! I also fed a short maggot line and had zilch on that early doors. Shipping out with pellets to an 11m line, which was in about 3.5ft of water was also very slow. Eventually however I got an indication and that signalled the first of a good run of F1s, which started small but eventually went up to 1lb. I also had some ide. Yes on pellets!

The rig for here seemed ideal; a 0.4g AS3 with a spread bulk and a 4in 0.10mm hoklength to an 18 Silverfish Pellet and doubled up No5 elastic. Lots of bites were positive lifts and I caught on both 4mm and 3mm expanders, feeding softened micros and an occasional pinch of groundbait.

When this spot went quiet I shifted slightly further up the slope in about 3ft and had a few more F1s and ide but it was nowhere near as productive. I tried right on top of the shelf in the shallowest water but that was completely useless. I also never had a touch down the edge, so soon deduced that despite all the cold rain going in the fish still wanted to be in deeper water. 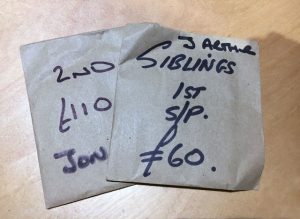 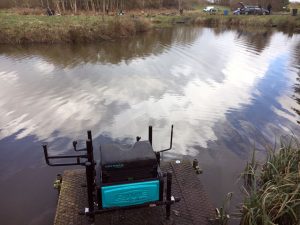 I popped a bit more groundbait in my original 11m swim and also began to introduce a few maggots. Dropping short I also finally managed a few fish, which were better F1s and the very occasional good skimmer. Strangely very few ide this close. Maggots with a 0.2g AS3 and doubled u No4 elastic on the 11m swim produced lots and lots of ide, however, and they were a reasonable size from 4oz to maybe 10oz. Upping the feed seemed to help pull the F1s in as well, plus a decent hybrid and one good skimmer.

For the rest of the match I alternate between this 11m swim and a short pole throwing swim and really plundered them in the last 40 minutes with a handy 3lb common on my last cast. When the scales arrived there were two 50lb weights on Siblings B and I knew I’d got at least that. I had 30lb in one net and 38lb in the second one (pictured) for a 68lb 12oz total. That won the lake and also placed me 2nd in the entire match for  a great end to a really up and down series for me. What a lovely lake. It was great to finally be able to give the fish some grub and catch plenty of fish. Spring is well and truly here!