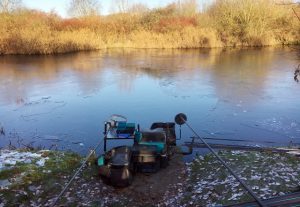 I cannot remember the last time I got up in the morning and said I didn’t want to go fishing, but yesterday was definitely one of those days! It was the 4th round of the Packington Winter League, it was definitely going to be frozen and I sadly knew that most of the 60+ anglers would not have a bite.

I was dead right. Only three people caught a fish in my 15-peg section on the low numbers of Molands. I think that was one roach, one roach and one F1. Just 8lb won the entire match!

The highlight of my day was a bit of ice breaking, then a desperate attempt to try and break the strip of ice between myself and a gap that the wind had opened up on the opposite bank. After wasting ages I finally managed to smash a channel through with 30 mins to go; first using my flask and some tent rope kindly lent to me by my next peg neighbour, who also joined in to help me with the ice breaking, and then casting a 1.5oz method feeder to break the final foot or so. None of this was ideal with my still broken rib!

Perhaps I should have just persevered and hoped for a single bite at 13 metres? At least it relieved the boredom, stopped me eating the bucket of sweets I’d brought with me and gave me half an hour of the match to try and catch on the lead. The result was as biteless as the other 4.5 hours, but at least I tried. Even if I didn’t really want to be there, no one can ever say I gave up without trying. I never give up!