Hard Going At The Barn 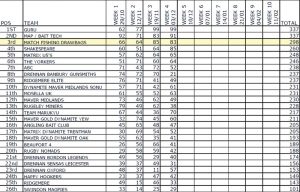 This was yet another rock-hard day but nevertheless quite an interesting and rewarding one. Yet again I found myself on New Pool. I quite like this pool although it’s probably the toughest weightwise. The big problem with New is the fact that it’s split with Jenny’s Pool. I think there are 16 on New and 10 on Jennys. That basically means you are highly unlikely to beat at least half the anglers lucky enough to draw on Jennys. Most of the pegs are simply so much better. So, you can fish a really good match on New, like I felt I did today, yet get beaten by someone who has potentially only got it half right on Jenny’s.

I drew New 26 and fancied it for a day’s fishing. However, with the temperatures being ridiculously cold and it having ben frozen just a day or two earlier the F1s had other ideas. In fact, despite seeing an odd fish roll before the start and also finding a ball of fish with my plummet well before the start, I never caught a single F1 until four hours into the match!

I was in good company as I think two F1s was the best anywhere near me until that time. Thankfully, I snared a bonus 6-7lb carp early doors (ok, first cast!) on pellets at 6m. Much to Pete Caton on the next peg’s dismay! Perhaps that commotion spooked the fish in front of me?

I also managed a 2lb perch and 6-7lb of skimmers to go with two F1s on maggots and pinkies and that bonus carp. Nothing on dobbed bread. I also searched in vain for that ball of F1s and couldn’t relocate it. I ended up with a very hard earned 18lb, which was good enough to beat everyone on my bank and gave me 4th on the lake, which was won with 28lb from peg 7.

Meanwhile, as expected, most of the anglers on Jenny’s beat that, so I imagine I was about 10th in my 26 pegs. Not a disaster but not the points I felt my efforts deserved. It was still a really interesting session that I came away from quite happy with, only losing one skimmer all day.

Teamwise, we had a great day with Paul ‘Riverfest Champ’ Bick, Joe Carass and Jamie Hughes all doing well from quite an average draw to give us a healthy 83-point total. That was enough for 4th out of the 26 on the day and puts us 3rd in the league. Team Guru stormed the day with 99 points off what can only be described as a phenomenal set of pegs. Fair play to them for doing the business off them all, especially match winner Paul Holland with a 75lb top weight from High 45. He is on a roll at Tunnel this season and deserves it after putting plenty of time in to suss things out.