5th In The PF Pairs Final 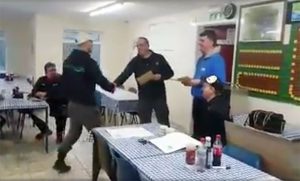 I was looking forward to this match ever since qualifying way back on Round 1 with Alan Scotthorne (Name dropper!) but wasn’t overly optimistic of our chances after drawing With F1s counting and the match decided on combined weight I really felt you needed to draw on a pile of them. That meant having an angler in the middle of High Pool (where the Preston sign is or bang opposite it) or the usual pegs on Arles (4 to 10 and 32 to 38). That’s unless things have drastically changed since I used to be a venue regular! I pulled out peg 18 on Arles for myself, which is the nearest corner to the entrance and one I’ve never seen throw up any huge quantity of F1s and with the wind hacking the other way it looked even less likely. I had Dave Brown to my right on 16 and Rob Wootton was sharing my corner on 22, so at least I was in good company.

Alan had drawn Back Deans 47. No one wanted to draw that lake in the morning, but I actually half fancied his chances of a few fish, as it’s one out of the windward corner and hopefully ‘could’ hold a few F1s and quality skimmers.

I kicked off on maggots at four to five sections and had a few silvers before, clonk, first carp. Or so I thought… as after a bit of pulling up popped a near 3lb F1! Was I on a pile? Nope, as I sadly only managed one more F1 all day (and that was foul-hooked at 13m, mid water and in the tail!). I chucked back four proper carp including a grizzly animal last cast, but they were actually a lot less problematic for me than most anglers I could see.

The rest of my fish were caught on two lines, left and right at 13 metres. This was an early run of skimmers before they disappeared never to return, aside from the very occasional blade amongst the roach. I also managed a nice 1lb perch short. I tried 16 metres when the strong cross winds allowed but this sadly only produced roach. I still had a busy day regularly rotating swims with a light 0.2g AS3 float to 0.09mm and an 18 Silverfish Match to No5 elastic with maggots and pinkies. I actually swapped between a 20 and an 18 and the bigger hook just felt better on the day. It’s also amazing what you can get out with a mega soft No5 elastic!

After a busy day I ended up with two F1s, a bonus perch and some silvers for quite a pleasing 22lb 10oz. The next two anglers to my right had 17lb and I think Rob and Tommy Hiller next to him had 16lb and 15lb, so I’d done Ok up my end of the lake. Alan coincidentally also did really well to weigh 22lb, which was 2nd or 3rd on his lake and with the venue fishing harder than most of us expected from the heavy overnight rain we thought we hoped to creep in to the top 10. We were therefore dead chuffed to be read out in 5th place for a very nice £500 pickup!

Well done to winners Andy Power and John Harvey for a great effort. Looking back it was a really great match to be involved in. Thanks to Preston Innovations for sponsoring it and Pole Fishing, Tom Scholey and Matt Godfrey for running it.