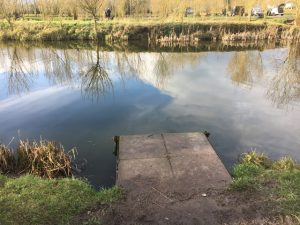 This was a strange old day. I was really disappointed to draw peg 5 on Extension, especially with it being so calm and relatively clear and with a club match on House Pool directly behind us starting and finishing at a different time. This peg is average at best and noted for small F1s and that’s what I mostly caught. I ended up with 73lb for 8th in the 15 peg section. A good weight but you needed 100lb+ to do any good. Those weights were mostly caught shallow whereas I really struggled to line any up.

I had a really good start on just a top kit with my best three fish of the day and some stockies on pellets before moving out to the far bank at 14.5 metres, again with pellets. This was ok but I felt the fish were way too small to do a ton. I ended up fishing down the edges for most of the match and did ok but committed the cardinal sin at Tunnel, which is waiting for bites and not moving swims when things got quiet.

I really wish I’d just persevered long and hoped the small runts got thinned out, or just worked the margins and long pole much harder in rotation. I just got a bit lazy by my standards, but really felt I was up against it on the day with much bigger fish being caught on the opposite bank.

Strangely, it didn’t seem to matter where I fished in the peg, I regularly kept picking up black leaves and other crap on my hook. the far bank was worst of all, but it was all over. Next door had the same issue and it’s not really something I’ve experienced before…

Anyways, Adam Wakelin had a awesome 162lb winning weight from peg 19, mostly shallow and short, and Bob Greenbury was second with 121lb on pellet shallow off 24. Those weights seemed all but impossible from my area on the day. I know a 73lb weight isn’t to be sniffed at, but I think 90lb was a realistic target if I pulled my finger out. I really wasn’t on form and it didn’t help watching Stu Palser work really hard to catch 99lb on peg 7. The guy to my right almost beat me, too, with half as many fish for 71lb. They were huge F1s and mostly on a top kit and paste. Yes, paste!

I’ve been really enjoying my margin pellet fishing, though. I’m normally really busy throwing bait but at the moment it just seems better to lightly pot in micro pellets and lower a 4mm expander accurately over the  top with quite a heavy 0.3g rig. I’ve also found bites are much more frequent if you come slightly away from the bank in fractionally deeper water. If a swim goes quiet, starting a new swim a metre away can bring a quick run of fish again. The final point is to try a variety of pellets. I have a mixed tub of hookers and the best at the moment seems to be a firm 4mm that hardly swells up. My normally reliable 4.5mm bloated, almost-white hookers are nowhere near as effective. I also have a few on smaller 2-3mm expanders, but they can bring smaller fish and unwanted silvers if you’re not careful. I’ve also tried unpumped pellets but still feel nailing a sinker near the deck is the way forward. There’s a lot to experiment with, but I’m still looking forward to being able to throw some bait at them very soon, whether that’s pellets, meat or casters!