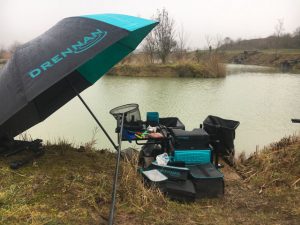 Oh boy this was another cold and windy one! Thankfully it was side on to me and that meant I could prop my umbrella up as a much needed windbreak. It’s something I rarely do, but today it made all the difference and I definitely felt a few degrees warmer as a result.

I was a bit gutted to draw on Damson Lake again; not because of the fishing, but because this lake is nothing like any off the others so it would teach me very little for the forthcoming Winter League Final. However, I was on the furthest bank this time and had some room and quite fancied it.

I caught really well from the off with mostly chunky little mirrors and the odd small stockie F1, plus a bonus 4-5lb chunk. They wanted pellets but as the weather worsened it became more difficult to present them properly and that’s when I had to switch to maggots, feeding micros and maggots together on two lines, left and right, but also working my way out to 10 metres later on as bites faded.

I tried a mini feeder to the island but that only produced one rudd and never felt right.

Mid-match I just felt I needed to make something happen down the edge and replumbed a new swim. The margin on this lake are pretty terrible with a steep slope but I managed to find a slightly more gradual slope towards my left hand pallet and began trickling maggots and micros here too. Double maggot produced a great run of late carp, plus a few surprise barbel to keep the catch rate ticking over.

At the end I felt I’d done ok and was really pleased to discover I’d won the lake with 59lb and also come 4th in the match behind the top three, who all came off Oak Lake.

The swim was about 6ft and with bagging fast in mind I’d started on a positive 0.8g AS6 with a big bulk, one No8 dropper, a 4in hooklength of 0.11mm to an 18 Silverfish Pellet and 10 Hollo, dropping to a lighter 0.6g AS3 and a 0.10mm bottom as things got harder. Down the edge I used a 0.2g AS4 with strung out shot and similar end tackle. Simple stuff, but it worked rather well!