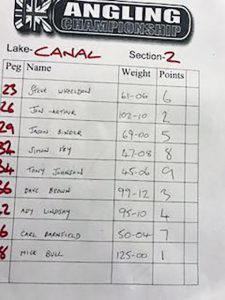 Round 3 of the UK Champs was at the superb Weston Pools complex. I’ve shot three or four features at Weston over the years but this was my first chance to actually fish there myself. I’d not seen the place for several years, however, so thanks to Matt Godfrey for giving me some very handy pointers.

I drew 26 on Canal and was told it was very average, but it looked nice enough to me with 5 of my section in this arm of the lake.

The first few hours were pretty uneventful. Nothing shallow on pellets or casters and the only place I could catch a carp was fishing out of the peg to my left just before the shelf dropped off.

The edges were poor early doors but I was getting signs and was sure fish were down there. I’d fed the left with casters and the right with hard 6mm pellets. I finally managed one barbel and a carp on double caster and a switch to a 6mm expander on the right hand swim saw my catch treble in the last two hours. Pound for pound Weston has some of the hardest fighting carp I’ve ever played!

I ended up with 102lb for 2nd in section, behind Mick Bull’s 125lb from the fancied aerator peg 48. Happy with that.

Other than the margins being way too deep I can’t fault the place. Just wish it was a bit closer than 125 miles away!

Oh, and thanks to Cadburys, Lucozade and Monster energy drinks for helping me get through my first match after becoming a Dad!