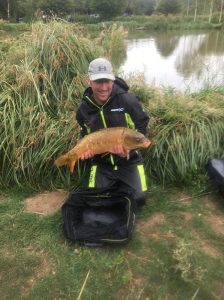 Two Maver Match This qualifiers this weekend. First up Tunnel Barn Farm on Saturday. Bit deflated drawing peg 31 on New Pool as I felt it wouldn’t be a lake or peg to win the day. However, I’ve still had a day’s fishing and put 112lb on the scales.

Surprisingly, the proper carp fed and more than half my weight was commons and mirrors on dead maggots and groundbait. In hindsight I wish I’d fed corn or meat or paste instead, but there was no way anyone was going to catch 200lb on this lake on the day. Well done Matty Dawes winning with 225lb from Club 15 and really unlucky Ben Fisk, just missing out with 221lb from Canal 1.

Today was my last chance at making the Final and I pulled out corner peg 115 on Lake 8 at The Glebe. I’ve never fished this lake before, but I wish gardening was allowed as it was really overgrown with thick grasses and the shallowest water I could find down the edge close in was 3.5ft and no less than 4ft along the right-hand bank. Not ideal!

I started off pretty well catching on 6mm pellet up the bank and in open water, then had a good run down my edge on corn and was starting to think I could have a chance. I then went two whole hours without putting a single fish in my keepnets! I think the breeze blowing towards the diagonally opposite corner didn’t help as the whole peg just felt devoid towards the end. I did manage two very late carp to cheer me up, but only plonked 84lb on the scales, with about 115lb winning the lake from the windward end.