A couple of decent draws and lake wins this weekend! 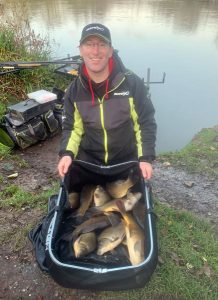 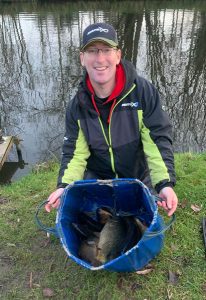 Yesterday was Round 4 of the Tunnel Barn Winter League. I was handed peg 27 on Extension, which is a nice peg that’s already been kind to me this year.

I kicked off on bread, searching all over the peg, but could only catch roach and one tiny F1. I swapped to maggots in 3ft and 5ft and caught a few fish but also foul-hooked a few. Oh, and I also lost a big carp that dived through my platform legs, much to Dave Brown’s amusement next door!

The fish just wouldn’t settle over any bait, so I picked up the bread dobbing rig again and stayed on that most of the day. I’ve ended up finding a few fish to weigh 56lb, which was enough to win the lake and put me 2nd in the 22-man split section behind a 59lb on Canal. Our Team Dynamite quartet also had another steady points score, moving us up to 3rd in the league.

Today was Round 4 of the Packington Winter League and my turn to be on Little Gearys. I think we all wanted pegs 7, 9 or 11, so I was chuffed to pluck peg 7 from the bag of dreams!

I’ve had a pretty simple day, catching everything on the long pole with maggots to weigh 48lb. That was enough to win the lake and come 3rd overall. I think 52lb won the match from Molands, so I wasn’t too far off.

Feel I’m fishing and drawing well at the moment, so it’s nice to be catching a few during winter bingo season!