My White Acres Maver Festival was a bit up and down and ended with a really disappointing draw on Twin Oaks. It wasn’t the best of starts either when my whole family came down with a 24-hour bug just before making the trip to Cornwall. In fact it was touch and go if I’d actually make it. They should rename nurseries to germ centres! Anyway, here’s how I got on over the five days… 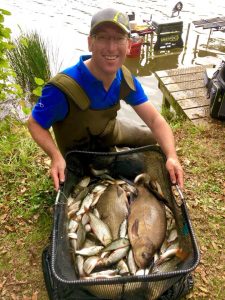 Porth Reservoir was the destination for Day 1. I’ve got a really good record on here and was fairly happy with peg 76, although we’re all guinea pigs on the first day as no one knows if the bream will feed til then.

Well I was having a lovely match catching 20lb of roach, odd rudd and hybrids on the pole and well on course for top two in section. Then Andy Lloyd and Tom Edwards to my left spoiled everything by bagging six or more big bream apiece!

So, in the last hour I was also forced to sit for those big slimy bronze things and managed two to boost my weight to 27lb. That gave me 3rd in section and 3rd on the lake with Andy having 33lb and Tom 35lb. A really lovely day’s fishing and surprisingly nice weather for Porth as well! 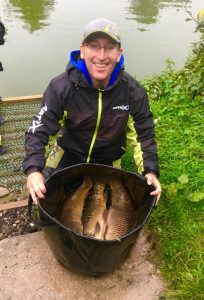 Completely different conditions at Bolingey with chilly wind and rain! I missed the draw(!) and by the time I got to the shop there were just two pegs left. I pulled out peg 25, leaving flyer corner peg 33 undrawn! I’ve drawn 25 before and it’s not a bad peg, but up against it if anyone good is on 24 to my right and 29 in the nearest corner to the car park. Tom had that privilege!

I had nine very small carp early on pellet in open water, then picked off fish down the edge on corn to end up with 135lb and another section 3rd. Tom weighed 150lb and the lad on 24 had 165lb, despite going over in two nets, which probably also cost him the lake win. At least I won a side bet with Tom who insisted I had caught more than him. Easiest £20 I’ve ever won (and I’m still waiting for it!).

So, two days in and two really good days fishing but only two 3rds to show for it. 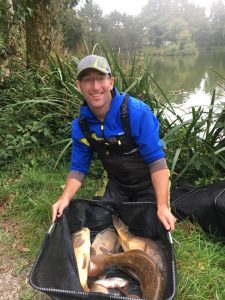 After three lake wins on Pollawyn in three consecutive festivals it let me down today! I was quite happy to draw peg 17 as it’s a decent draw but, like most people, I’ve struggled to get a bite despite signs of fish in the peg.

It was flat calm so I really fancied the waggler, but only one early ghostie on that, giving me false hopes. Not a bite on the bomb, one carp on the method feeder and one down the edge, plus a few token silvers for 28lb.

The guy to my left on 16 who I think won the section with 50lb, making the most of peg 15 not being drawn. Well done Tom Edwards winning the lake off peg 26 with 65lb. Andy Power was 2nd off point peg 19.

There are loads of fish in Pollawyn but even the silvers weren’t feeding – a pattern that continued all week and the week after! 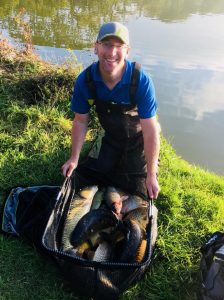 Peg 49 on Trewaters is definitely not a peg you’d run to, especially with what little breeze there was going up the other end towards flyers 37 and 53.

To cut a long story short the lake fished abysmal and my 39lb was miraculously good enough for 2nd, with peg 53 winning the lake with just 49lb.

After a decent start close in on pellets and a couple of fish long on a swinging rig to the island 18m away I must’ve gone 2.5hrs without a fish. It was a similar story all over. Thankfully I managed four fish in five chucks in the last 20 minutes on a little groundbait method feeder and dead maggot to salvage a half-decent result. Can’t believe how hard that was!

Day 5 was pretty much game over as soon as I pulled out Twin Oaks peg 8. Boo hoo! This is the peggiest section at White Acres and the low numbers are always up against the boss pegs 10-18, with 16 being the best peg in Cornwall!

I decided to fish worms for everything that swims with the hope that it would fish hard and I might scare a result a mixed bag. However, even that failed as I had a few carp, a few silvers and two massive F1s for 44lb and nowhere.

As expected, I needed over 100lb to come 4th in section or higher, and that felt impossible from my peg on the day.

So that was my festival. I ended up with a 2nd, two 3rds, a 4th and a 6th and finished 50th or 51st out of 180. Not a disaster but still a bit disappointing for me, especially as I felt my first two day’s efforts deserved more than section 3rds.

Anyway, it was a nice relaxing week for me down there with my family and I was now all set for the all-important Preston Festival the following week…

I must add a big well done Dale Shepherd on the festival win!