The previous week was a nice rehearsal for this one, the Preston Festival, which is easily the biggest and most important festival down at White Acres, with a place in the £25,000 Parkdean Masters at stake for the lucky 24 best anglers. Here’s how I got on… 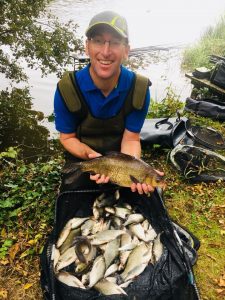 I had at the same rotation as the previous week and a LOT more superstars in my 36-man zone. Day 1 at Porth saw me with Andy Power one side, Lee Mushy Farmer the other and Des Shipp two up!

Des destroyed the match off the jetty peg 77 with 58lb of mostly bream on the pole! I’ve been more than happy to take 2nd in section and 5th on the lake with 20lb of roach and skimmers, plus a bonus 2lb+ hybrid that fought like a demon! Almost everything was on the pole, fishing maggots, casters and worms over groundbait. A lovely start to the festival! 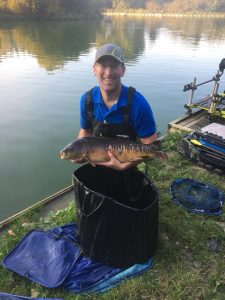 Peg 15 on the back lake of Bolingey with top anglers Nathan Watson, Paul Holland, Andy Bailey and Dan White for company! Flat calm with bright sunshine and the fishing was really slow with moody carp not wanting to feed.

I had a great start, forgetting my rods(!) and must say a huge thanks to Des Shipp for very generously offering to lend me his as he didn’t need them in his section. I then did a good turn myself, lending Dan White some floats and rigs as he’d forgotten all of his!! What are we like?

I had seven carp on Des’ 10ft rod and a pellet feeder cast up to the island, four at 16m pinging 6mm pellets, one on pellet shallow, three runts on meat short and five down the edge on corn.

I moaned quite a bit as my fish were all on the small side all day, but then my last two totalled 22lb, which cheered me up a tad!

I ended up with 114lb and another 2nd in section, with Paul Holland winning the section with 132lb, which included an 18lb beastie! That keeps me well in the running with rock-hard Pollawyn tomorrow… 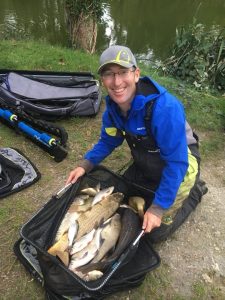 Peg 22 on Pollawyn was my destination, which is on the right-hand point. Not too bad a peg, but we were all fishing for 2nd after Andy Power had drawn boss peg 21 on the left-hand point!

I had a funny start to the day as I impaled my hand with a size 12 hook while setting up. It took a bit of getting out before I nipped to the cafe and asked the lady behind the counter for a plaster. Meanwhile I popped to the toilet to wash the blood off and by the time I came out, she’d obviously rung for help as Clint Elliott and a big security bloke were waiting for me looking all concerned! I told them to hold off on the air ambulance and somehow soldiered on for the rest of the match with my near-fatal injury!

On to the fishing, and I managed two carp towards the bramble-strewn island at 16m (still a metre short of it) in the first half an hour for 14lb. One in the tail and one in the wing! I then struggled for a few silvers and little F1s from this spot.

One tiny F1 on the bar in open water at 16m, so I sacked that off and chucked a pellet feeder tight to the big island. This produced a big F1, three small ones, a carassio and a 6lb ghostie before going quiet.

I then spent the last two hours catching very little on everything I tried while Steve on 24 bagged almost 30lb of carp and bream in the last hour on meat short. All I had on the same tactic was two very small skimmers. Steve ended up 2nd in section with 42lb. As expected Andy won the section with 46lb and I hung on to 3rd with 32lb. Reasonably happy with that! 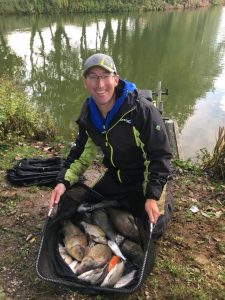 White Acres Preston Festival Day 4 was a rather wet and miserable one! Once again Trelawney has been my nemesis. I drew peg 15 and had a nice first half of the match, but I’ve got it all wrong in the last two hours.

I caught a few F1s and chunky skimmers short on worms, plus a few fish on a pellet feeder. Not a bite on caster shallow and hardly anything down the sides, which has really cost me.

I’ve come 5th in section with 30lb, but only 46lb has won it, which I’m sure was achievable if I’d stayed on my silverfish lines all day.

My points aren’t bad so far, but with Acorn, Canal or Trewaters on the last day I need a win to make the Final… 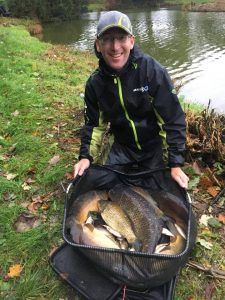 Like most people that night I couldn’t sleep as the caravan felt like it might blow away! I called it Storm Sally as it was one very evil and ugly bastard of a storm and had even blown trees down all over the complex!

I needed a section win to stand any chance of making the Final and was happy to be on peg 5 on Acorn Lake, although end pegs 3 and 17 had dominated all week.

First job was to heave out 15 big landing nets full of leaves before the start as the peg was unfishable! I hoped that wouldn’t scare the fish and thankfully it didn’t.

I had a nice day catching carp, F1s and roach, fishing short with worm and caster and down the edges with corn and micros. My 77lb was enough to win the lake and was a perfect end to a great week!

I ended up with a 1st, two 2nds and a 3rd for 32 points, dropping a 5th. In a mega tight frame that gave me 17th place and enough to make the £25k Parkdean Masters Final the next day. Yippee! A big congratulations to Paul Holland winning the festival. When the likes of Alan Scotthorne, Grant Albutt, Matt Godfrey and John Whincup don’t qualify you know it’s not an easy feat!