A Tough Week At White Acres 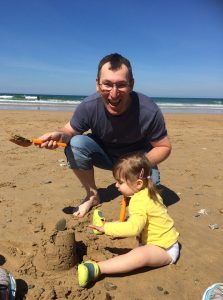 Not long back from the Dynamite Baits Festival at White Acres. I was down there with my wife and a very needy toddler, so the daily updates were a no go! It was nice, dry and sunny all week (no daily hailstorms this time!) and my bacon frazzled ears are now in need of a bit of aftersun!

I had an up and down week, but I knew it would be tough with the likes of Andy Power, Andy Geldart, Nick Speed and Tom Edwards in my rotation each day! ? 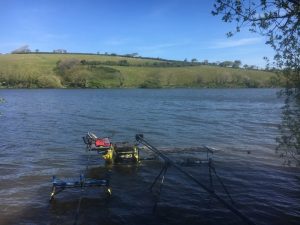 Day 1 I was at Porth Reservoir on peg 20. e’re always the guinea pigs for the rest of the festival on the first day but I expected a few bream would show – but not in the numbers they did! I had a decent start with roach and skimmers on a short feeder while everyone else in my section seemed to be struggling. Dropping on the pole I was soon catching quality roach and nice rudd one a bung and was flying. I’ve had a few 20lb+ bags doing this at Porth and was well on course for another. Everyone else then started to sit for a bream… and were soon reeling them in! ? 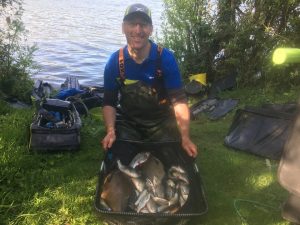 With a good weight of silvers already in the net I could cope with people having a couple of bream apiece. However, I fed a load of pellets on my feeder line just in case. Suddenly there were four anglers in the section all with three or more bream and that’s when I panicked and felt I had to follow them. I managed one good one about 4lb and lost one, fishing a pellet feeder and yellow Washter, but in hindsight I should’ve fed another 10m or more further out on the tip. I also dropped on the long pole and had an eel and a foul-hooked 2lb bream but strong winds made that swim difficult.

The last hour was uneventful… at least for me! Nick Speed and Danny Scott on the two end pegs ended up with 6 bream apiece for 24lb and 25lb. Paul Christie had five for 20lb and Tom Edwards had 10 which surprisingly only went 31lb. My one and a half bream, an eel and silvers went 22lb for 4th. I was just 3lb off 2nd but thought I was further adrift and was absolutely gutted as their bream were smaller than I expected. I’m sure I would’ve caught enough for 2nd had I not come off the pole or sat for bream so long. It’s not very often at Porth where 22lb is only good enough for 4th in the section. Oh and Andy Power won the lake with 50lb of bream off end peg 39. That set the tone for the rest of the week! ? 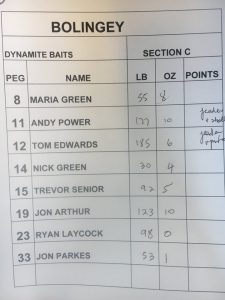 Day 2 and Bolingey 19 was my destination. An average peg in a very good section. I pretty much knew I’d draw this peg after having a long chat with Alan Scotthorne about his frustrating day on the same peg the day before! It’s the first peg over the bridge and boxed in by trees either side, so you can only fish about a top kit down each margin, but you have got an island feeder chuck, albeit a snaggy one. A stormy wind was also hitting us in the face from all angles on what turned out to be the windiest day of the week.

Meanwhile I could see Andy Power and Tom Edwards sitting pretty with the wind off their backs and mugging rigs out on flyer pegs 11 and 12 in my section. Perfect pegs on the day and both with a nice feeder chuck, too, so we were all fishing for 3rd at best! As expected, they came top two with 170lb and 180lb while my 126lb was a comfortable 3rd. I had five on an Open Alloy Feeder and 7mm Washter and the rest down the edges on corn and pellet. I really don’t think my peg was worth the extra 50lb+ I needed for another point, especially in those conditions.

Andy Geldart won the match with 200lb off end peg 37 in the left-hand arm and Tom and Andy were 2nd and 3rd overall, so I assumed I’d get the default section envelope. Nope, not this week as there were only 140 on the festival. So two days in things are already not going my way, ha ha! 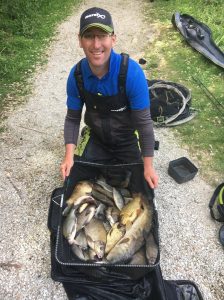 Day 3 and I was reasonably happy with peg 35 on Pollawyn. Probably the fourth best peg in the section behind pegs 19, 20 and 45. I was already quids in after rescuing two Guru pellet wagglers and loads of line someone had tethered to the far bank!

I had two nice spots to chuck a pellet feeder tight but surprisingly only managed an F1 and an anorexic carp on this all day. I then had a few F1s and a small barbel on pinged pellets at 16m, plus a few silvers and F1s on worms short. Sadly no proper carp showed up at all, which I was really surprised about.

I ended up with a 40lb mixed bag for a section 2nd, with peg 20 winning it with 44lb. I could’ve had the extra 4lb if only I’d clocked a few things sooner with my feeding. I also should’ve fed meat perhaps, but I went for a safer option with worms. Swapping to paste with 30 mins to go brought three better skimmers, but again no carp. 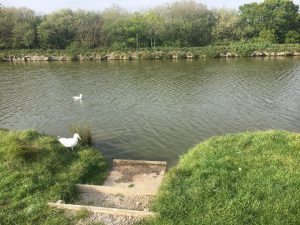 The seagulls did better than me at Twin Oaks!

Day 4 and definitely my worst performance of the week off Twin Oaks 8. I don’t like this peg but it hadn’t been too bad all week as the wind was blowing towards peg 1 rather than towards the usual flyers peg 16 and 17. That meant end peg 4 and 6 were the two pegs most of us wanted – definitely something you don’t hear very often at Twin Oaks!

I had an untidy match where nothing really worked and was soundly beaten either side. Andy Power had a pile of F1s shallow on peg 6 and Andy Geldart had a load of carp and carassio on the tip on peg 10. I couldn’t catch much of either and only plonked 81lb on the scales. Oh, and Nick Speed won the lake with 147lb off peg 14, doing what he does. I was 4th in section and a day to forget! ? 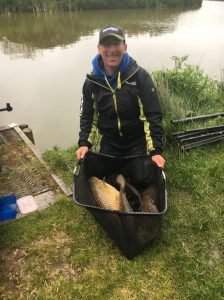 Day 5 and yet another mega tough section, this time at Trewaters. Nick Speed was on peg 21 with end peg 19 not drawn! Paul Christie was next to him on 23. Andy Power was on end peg 27 with 25 not in and the wind blowing that way. Tom Edwards was on 29 and I was on 31 with two decent anglers on 33 and 35. This wasn’t going to be an easy one to win! ?

I’ve had a nice start catching three carp on 6mm pellets short, then a dozen small carp on a mini pellet feeder tight to the island with 5mm Washters or dead maggot. Love my 9ft Matrix Aquos rod for these short chucks, by the way! I’ve then managed three better carp close in, again on pellets, before snaring seven good fish down the edge on corn. They don’t half fight in this lake, so green and red Slik were called for! 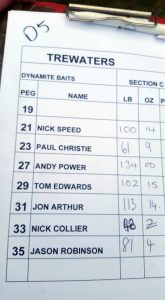 I’ve ended up beating Speedy and Tom with my 113lb but Andy Power has fished a blinder to win the lake with 130lb. I also tied with Andy Geldart on weight for 2nd overall, so even when I get a lake prize I have to share it, ha ha! Still a decent result to end the week with…

Well done to the top 10 as it was ultra close and especially to festival winner Kev Wadge who had a faultless week. I must also mention the generous goodie bags that Dynamite supplied all of the competitors. Everyone I spoke to said they were impressed with lots of good and genuinely usable stuff in there, which isn’t always the case on festivals! ? 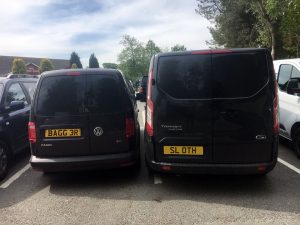 Oh and I must mention big Paul Christie’s van parking (abandoning!) next to me at Pollawyn. Absolutely shocking. I refrained from knocking him out as he’s a mate… and five times my size! ??? 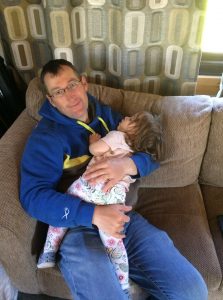 Looking back I’ve not drawn any flyers but not had too bad a week weightwise. I’ve definitely not had the best of luck at the drawbag with top anglers on top pegs each day, but that’s just how it goes sometimes. It was still a really nice week in Cornwall with my family, albeit a tiring one. I know my daughter loved it and, who knows, she might even be whipping a few fish out on Jenny’s next year! 😉 ???