Two Out Of Three 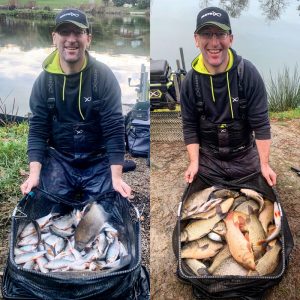 Just got home after a nice 4 hour trip from White Acres for the 3 day silverfish festival. Weird weather for Cornwall; not a breath of wind and not too much rain either! The fishing has been excellent with loads of good weights. Mostly carassio and F1s, though, as the skimmers and perch were a little elusive, but Grant Albutt and I both had a good net of roach on the last day, which was lovely fishing.

I had a shocker on the first day off Twin Oaks peg 10. I caught 53lb of mostly big carassio long on maggot over groundbait. That would often be enough to win the section, but I was actually last in the five pegs with that! Erm, not the start I wanted, but well done Mikey Williams winning to my left. I was a bit gutted as he’d pulled my leg so much in the week that I thought I might get the last laugh, but hey ho, maybe next time!

Next day I thankfully bounced straight back! I drew peg 24 on Pollawyn, which can be an iffy peg for some but I personally quite like it. It‘s historically a great area for big perch but they’ve not fed all week. Instead I’ve had a cracking day catching mostly F1s of all shapes and sizes on maggots and casters over the new Dynamite Silver Fish and Milled Expander groundbait to win the section with 52lb. I’m sure I had a €1 wager with my French pal Olivier Wimmer next door, but he just muttered something about Brexit and my terrible singing as he left!

The final day I’ve been on Jennys and was really gutted to pull peg 3 out of the bag. Although it’s an end peg, in-form pegs 48 and 49 were also in the section all by themselves opposite us and would be very hard to beat, especially as that’s where all the big F1s seem to live. I was warned our side would be full of non-counting carp… and they were dead right!

Kicking off on the waggler I’ve winched two big mirrors in on an 0.10mm bottom. Third chuck I’ve reeled in and foul-hooked another double! Ian next door was having similar fun, so it was time for an early look on the pole…

Nothing but little roach were feeding, but with Pete Bennett looking odds on to trounce the section off peg 48, I thought I’d have a proper go for those redfins in the hope that I might increase the size and snare a few bonus fish amongst them.

I’ve ended up having a great day catching roach, plus a couple of skimmers and two late F1s. I also hooked another four great big carp that didn’t count. My 34lb was enough for a comfortable 2nd in section, but still way off Pete’s 51lb of quality fish.

It was a nice end to a decent week, catching three very different looking nets of fish for a 1st, 2nd and a 5th and a 138lb total.

Well done Steve Conway on winning the event. Thanks to Gary Barclay, Clint Elliott and the White Acres team for running it, plus lodge mates Glenn Lawrence and Neil Mallinson who I stopped with.

Quality fishing against some top class anglers and with lots of banter each day, too. Can’t wait to get back there for some more!