Back On The Busy Thames 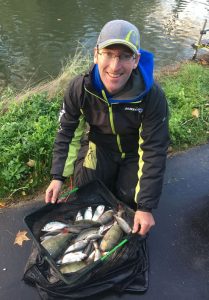 Back on the Thames today for Round 3 of the Oxford Winter League and, of course, I was back at Folly! This is the third Thames match on the bounce I’ve found myself in the ‘beautiful’ city centre, but it’s gradually got less busy – so only 250,000 walkers, joggers, cyclists, druggies and weirdos today!

I drew two pegs to the left of the entrance, downstream of a big sweeping bend, and was told it was snaggy close in but good for perch around 8m out in the deepest water with roach at around 11m where it starts to shallow up.

I decided on a cautious approach today, potting everything at the start. I cupped in chopped worm and casters plus a tiny bit of groundbait short and then 10 balls containing a modest amount of casters, hemp and dead pinkies went in at 11.5m. Thinking it could be difficult I went for a low-feed mix, which was Dynamite Frenzied Hemp Black plus a bit of Roach and half a bag of black damp leam.

Not a bite after 15 minutes had me worried, so I thought I’d try a flouro pinkie over the choppy swim. That sailed away with a roach, then another, so I quickly popped a caster on and didn’t look back.
The long swim also switched on after 50 minutes and I managed to alternate both swims all day. A few chunky perch also eventually showed up on the shorter swim, but strangely not a bite on worm over the top, despite feeding it.

With half an hour to go I’ve struck at a bite and connected with something very substantial a foot off the deck. Elastic streamed out as it surged downstream and topped almost in the next guy’s peg! It was so far away that I couldn’t tell what it was! I eventually coaxed it back and had some fun and games all over my peg, eventually netting it with 9m of pole in the air. It was a 2lb perch foul-hooked in the belly! Yes, I’m getting really good at this foul-hooking lark!

That fish didn’t actually affect the result as I weighed 13lb 2oz to win the section with 7lb 10oz coming 2nd in section. Our Oxford team also won, making it three out of three and maximum points at the halfway stage.

Other than a couple of patchy areas the river fished pretty well again with a number of double figure bags and low-20lb weights making the frame.