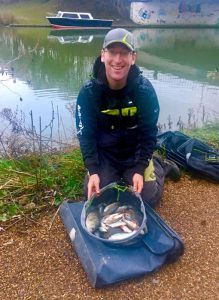 My last match of 2018 was the Top Tackle Oxford DAA Xmas Match on the Thames at Donnington. I’ve shot a couple of articles on this stretch but never actually fished it til today. I was looking forward to it, though, as all the pre-match talk was of big weights of roach, perch and bream. Sadly, I think we were a few days too late as there was next to no flow for those of us drawn up at the Donnington end.

Not a bite on the feeder and with no one catching any bream I fished the pole most of the day. I started on bread, then caster, then ended up scratching around with pinkies and maggots over groundbait for 8lb 13oz of roach and perch. That put me third in my 10 pegs. Agonisingly just a few ounces off a prize, as Trevor Chalk had 9lb for 2nd and the section was won with a nice 19lb catch off the downstream end peg. Gutted, as that weight was 5th and they paid the top four, so no defaults for me! 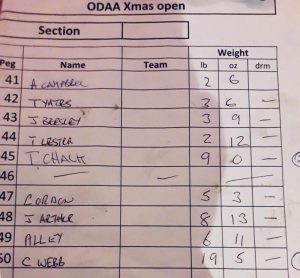 After the first hour, the only way I could get a bite was to hold on to a 0.5g strung-out rig, fished overdepth and keep laying it in all over the peg. I did lose one really big fish, which I assume was a 1-2lb perch that eventually snagged and broke me. Also really wish I’d fished a wag or bolo down the middle, but that just seemed too negative an idea before the start, especially if the bream had a chew.

Further upstream it was a different story as there was still some pace before all the flow got diverted down the sidestreams. Dave White won the match with 54lb of bream, with two 30s and a 26lb filling the top four. Well done all the framers. Hope I can catch a few of those bream in 2019…