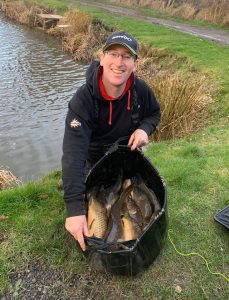 Had my first Tunnel Barn Farm ton of the year on Round 9 of the Teams Of 4 Winter League today!

I drew a feast or famine peg in the shape of Club Pool 13 and it’s definitely not been the latter as I’ve weighed 104lb 15oz for 2nd overall. Less than 1lb off winning!

The bread rig was a trusty 0.2g Malman Mojo and for maggots I used a 4×10 Speedy Titan. Both with 8-10 Slik through a Short Kit. Had one foul-hooker break me and one snagged me solid down the middle but other than that I’ve had a fairly tidy day, other than trying to stop all my gear blowing away!

As a team, though, my Dynamite foursome didn’t fare so well, scoring just 45 points. That’s dropped us down to 2nd in the 22-team league with one round to go. It’s all to play for next week, with at least four teams capable of winning.