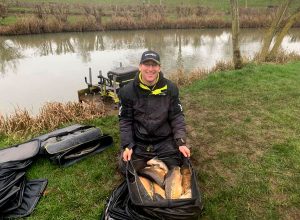 With our electric off all day I decided to get out the house and fish the midweek open at Makins. Even though it’s over an hour away I didn’t need much persuading!

The match was split between Avon and Severn pools on Phase 3 and I plucked peg 5 on Avon from the bag, with Gaz Wood to my right on 1 and Steve Haywood eventually arriving on peg 8 to my left.

My pre-match prediction was 35-40lb to frame, but it’s fished pretty good for January. I’ve had a nice day catching around a dozen carp for 52lb and 2nd in the match. Andy Searle won with 70lb from peg 14 and Mark Griffiths was 3rd with 47lb from Severn.

I’ve caught everything across, fishing around some overhanging brambles. Five on bread, a couple on corn and the rest on pellet. I’ve fed green Swim Stim micros with a 6mm expander over the top, both given an extra dash of Dynamite Betaine Green Pellet Soak.

With only 3ft down the middle and 2.5ft across I only set two rigs up. Both were 0.2g Malman Mojos on 0.18mm Power Micron to a 0.14mm hooklength and size 18 and 16 hooks. Red 10-12 Slik through a Short Kit was best as I had to drag several fish out the brambles and somehow didn’t lose any in there! It’s the first time I’ve used Short Kits at Makins and they were spot on. These lakes average just 13m wide so you don’t want miles of elastic streaming out, especially with Makins’ notoriously spooky carp.

I’m sure the weights would’ve been higher if it wasn’t for the amount of nuisance roach in everyone’s peg. They were even having a go at double 10mm bread! It made me think you could have a surprisingly good silverfish-only match on Phase 3 if anyone ever fancied running one…