Back To The Barn 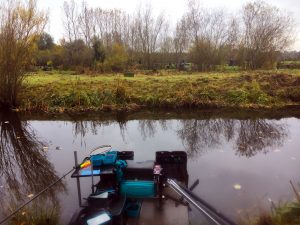 Another high-pressure, flat-calm day with not a breath of wind. I actually like fishing in these conditions as I think presentation and feeding comes even more into play, but I still knew it’d be hard.

I did our Match Fishing Drawbags team draw as per usual and pulled out a mixed bag. Peg 19 on Extension for Jamie Hughes, which he was happy with and went and won the lake off and was 3rd in his 26. A not-so-pretty peg 19 on House for Joe Carass which he did well to catch 42lb off for about halfway. Peg 40 on High Pool for Paul Bick which is another average peg. I was quite happy with my peg 36 on New, especially when I discovered 35 was not in this year. It was probably my 5th or 6th choice on that lake, so coming higher than top six on the lake was my obvious target. However, with my section split with Jenny’s we were all right up against it in the overall section stakes.

Peg 36 is only 10m wide but seems to hold fish all year. Plumbing up I was really disappointed to find no more than 3.5ft anywhere though. The deepest spot was a slight hollow in front of me that shelved up sharply after 4m. I felt it was a reasonable place to start on pellets but was probably too close to plunder in the last hour on maggots. Elsewhere I had a reed bed left and right with only 2ft of water against it and coming a metre back it was about 2.5ft at the most. Even down the middle, left and right, it was only 3ft. That meant one light rig could pretty much do it all. Of course, me being me, I still set up six different ones to cover myself, including a couple of bread dobbing rigs for across.

Incidentally, my elastics have now swapped to ‘winter mode’ and that means doing away with most of my hollows. I find they just start to misbehave when it gets cold. I settled on doubled-up No5 through a full kit and also thought I’d have a play with doubled No3 through a shorter Double 2 Kit. Both worked really well on the day. I think you want something very soft but you also don’t want ridiculous amounts of elastic coming out on these narrow and shallow pegs.

I had a jittery start on pellets at 4m, catching two tiny stockies and a couple of small F1s, before going across with dobbed bread for just one small F1 and a dropped off roach. A switch to maggots 3/4 across to my left brought an F1 then nothing. Swapping to a right-hand 3/4 swim did the same. For the rest of the day I pretty much stuck to this 3/4 zone and fished left and right, chasing fish farther away and then coming back closer again in the last hour. All on maggots with my favourite double red combo on the hook.

I was catching plenty of fish but they were 14oz to 1lb fish rather than the big 2lbers you want on this lake. I was last to weigh and it seemed the entire lake had fished hard. I ended up a creditable 5th on the lake with 45lb 12oz. Derek Hammond to my left has 20lb something and venue ace Stu Palser was on 33 to my right and had 51lb. Less fish but they were mostly the proper ones, including a handy 7lb beastie on bread! Paul Holland also just ounced me, plus there was a 48lb and a 62lb elsewhere.

Could I have done better? Of course! I was broke early on by a foul-hooked 3lber swimming midwater and lost abother big foul-hooker at the net, so that’s two or three places just there. I felt my frugal feeding worked well and rotating swims was definitely the way to go. I think I should’ve chased fish much earlier and also scrapped my pellet swims sooner. Other than that I’m fairly happy with my performance. I had quite a lot of fish, so it’s a shame they weren’t quite the stamp I expected or hoped for.

Meanwhile, as we all feared, the anglers on Jennys Lake battered us all! Des Shipp won the match with a whopping 130lb off Jennys 20 and I think 75lb was 5th on there. That’s a big ask from New Pool in winter and I can see this split section really making a difference over 10 rounds. Hopefully we can get a few of these kinder splits!

Teamwise, we ended up with a solid 64 points and are now 5th in the league. It’s gonna be an interesting series this year and I’m sure there are still plenty of twists and turns to come.