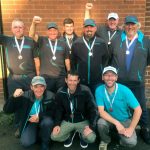 I hadn’t fished a National for years, but that all changed after agreeing to join Drennan Oxford and fishing the Division 2 on one of my old stomping grounds, the Birmingham-Fazeley Canal. We finished up with a very well deserved bronze medal, but were agonisingly just a single point off winning it! It was still a great feeling being on the podium with the lads and also seeing so many of my old canal mates on the day.

Myself, I came 3rd in K Section and was extremely happy with that. 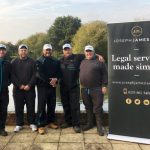 I’d never fished a match at Alders Farm until the inaugural Joseph James Law event we were invited to. Our Team Drennan quintet consisted of Grant Albutt, Joe Roberts, Dan Varney, Colin Spencer and myself and we romped to victory with 53 points out of a possible 60, bagging £1,000 in the process!

I had an ‘almost’ great day after coming 2nd in section with 156lb. However, just 10oz more was needed to win it… which I had actually caught! However, not being fully aware of the keepnet limits and panicking that I might be go over I stupidly decided to chuck two perch back that were swimming about looking very lonely in my ‘silvers only’ net, so I could use that net for carp as well. Together those perch would’ve easily gone a 1lb+. Luckily, there were no section prizes and it never cost the team. Phew! 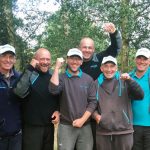 Another great team effort was winning the 2016 Angling Trust Masters. Fourteen teams of six battled it out on a very windy Glebe Fishery and our Team Drennan six-man squad smashed it with just 13 penalty points. I had a decent day on Lake 1 coming 3rd in section. I caught almost everything on the feeder, but the crosswind was so fierce I had to cast 4m to the left to hit the right spot in front of me! 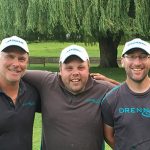 My Drennan Oxford squad also did brilliantly at Evesham. Firstly, we did the business to qualify for the Team Champs Final and then we came joint 4th on the big day, tying with Matrix Trentmen on points and weight, ahead of more than a few top teams. Personally, I had a very average Bank Holiday weekend on the Avon but I still thoroughly enjoy the whole Evesham experience.

Time With The Champ

Alan Scotthorne is the best angler in the world and it’s a pleasure to be able to get out on the bank with him regularly for films and articles. 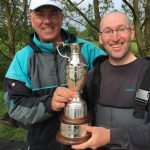 Probably the most memorable session was stick float fishing on the Tidal Trent. It was one of those days when I had to pinch myself afterwards after realising I’d just spent a day in the company of a true master at work.

As you’d expect, we chat about fishing a lot and share a lot of ideas and info, so I was really pleased when he asked me to fish the first Pole Fishing Pairs qualifier with him at Barston Lakes. I managed to come 2nd overall in the match that day with 88lb of skimmers and, more importantly, our combined weight meant we qualified for the big Final at our first attempt. Job done! 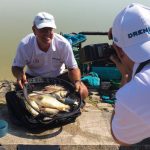 Another honour was being asked by Andy Ford to be his wingman while while covering the World and European Champs in Bulgaria and Holland. It was pretty exhausting chipping in with a bit of commentary while also running/cycling up and down the bank like a madman to ensure everyone back home was kept up to date, then spending the evenings beavering away on a laptop, but it was also worthwhile and satisfying as well.

I’ve been inundated with feedback from all sorts of people afterwards, too, so it’s nice to see my coverage was appreciated. The last few years it’s only really been Fordy and myself properly covering these important events for the UK media. It’s something I take very seriously to ensure international fishing gets the coverage it so deserves. 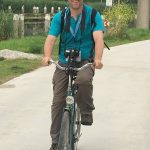 While covering the Euros in Holland I was kindly invited to stay with my good friend Maurice Prijs. The week flew by as we visited a number of Dutch commercial fisheries and sampled the excellent sport on offer. I even bagged a sturgeon on a margin pole!

We also co-starred in an article for Beet magazine on the North Holland Canal. The final three days were spent covering the two-day international. It was a great experience and I even learnt ride a bike without any proper brakes! Oh, I also stupidly forgot to pack any extra socks so Maurice was very kind to loan me some of his for the duration of my trip! 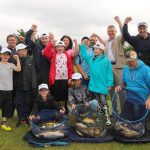 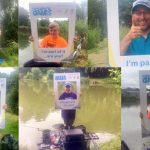 Spending a day at Barford Lakes to help out at the Norfolk School Games was also thoroughly rewarding. I felt quite honoured to be there as their so-called ‘angling ambassador’ and really enjoyed the day. I would have loved to have been able to spend even longer with every single angler, but I came away knowing I had helped as many people as humanly possible to catch fish. There were some really happy, talented and keen anglers and helpers on the bank, too, which was great to see.

Similarly, a day helping out with my good friend Dan Varney and the Severn Vale Housing Society at Hill View Lakes was equally fulfilling. I just wish I could do more stuff like this as it’s so nice to put something back into the sport and I know I’ve got a lot to offer. 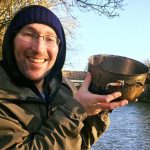 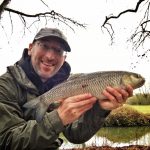 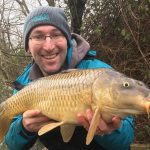 My list of lure-caught species was certainly extended in 2016. I’ve now managed a 10lb carp on a stillwater using a dropshot setup, a nice chub on a ned rig, a 2lb hybrid on a jig head (foul-hooked!) and, perhaps most bizarrely of all, an aluminium cooking pot, also on a jig head!

I’m loving these commando-style sessions roving around with just a rod, a landing net and a bag of lures. It makes a nice contrast from matches, grabbing a pleasurable hour or so on the bank, whether you catch or not. 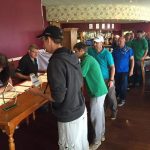 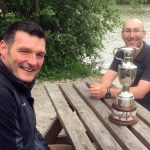 My UK Champs title defence came pretty close to being a success as I was right up in the mix going into Round 4. Sadly, I fell at the last hurdle after a really no-hope draw at Barston. I still made the top 10 and felt I fished reasonably well, all things considered. Looking back, I know I wasn’t on top of my game in 2016, but I’ve still done reasonably OK I suppose.

It was also nice to star in a one-off program on BT Sports all about the UK Champs. I must add that Andy Ford and Rob Hughes are doing a great job putting fishing back on the TV where it belongs. 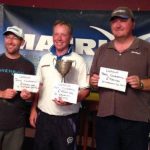 Although the UK Champs was an anticlimax, it was a great to finish runner up in my first ever Matrix Commercial Champs. This is a brilliant series run by Wayne Sharman over four different stillwaters (Barston, Packington, Makins and Meadowlands). Hopefully I can go one place better in 2017! 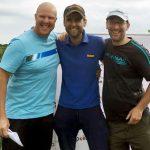 I always have a few very near misses on Match This and Fisho qualifiers and the closest I came to the Fish’O’Mania Final was the 180-peg qualifier at the brilliant Partridge Lakes. Ben Fisk won with 148lb and Andy May got the second qualifying spot with 117lb 8oz, thanks to a last-gasp F1 scooped in extra time. I got a consolation 3rd place with 116lb 13oz from peg 12 on Ribbon… just 11oz adrift! History shows that Andy went on to win the Final. A very well done and well deserved to him… but that could so easily have been me! 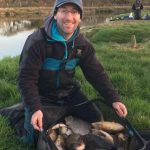 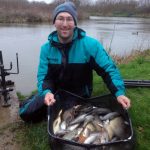 Catching commercial silvers and F1s is still my favourite thing to do in the wintertime, so it’s a shame there’s not enough of this style of fishing where I actually live. Travelling down to White Acres makes it all worthwhile, though. I love the place, especially in winter.

I fished two winter festivals in 2016. The first was the two-day Drennan where I managed to come 6th overall, only dropping a point to the eventual winner, Paul Yates. My highlight had to be a lake-winning 62lb catch of carassio on the waggler on Jennys.

The week-long Garbolino Festival was a bit tougher. I managed to stay in the top 10 all the way up to the final day when I tragically drew abysmally on Sycamore and it was game over. I still managed several decent results during the week, including a nice lake-winning 51lb on the first day. Once again, I learned quite a bit too. Mostly, you need to draw your nuts off!

I somehow managed to film myself during a winter league round at Packington early in the year and the final rough n ready video, shot entirely on my iPhone, has already had over 24,000 views!

I ended up winning the lake with a really satisfying 62lb of mostly skimmers plus a few carp on the tip. The response I’ve had off that film has been quite overwhelming for something that is deliberately not too polished. Hopefully I’ll get a chance to do another one or two films like that this year… 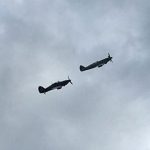 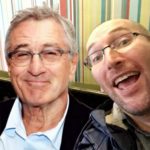 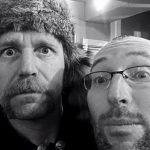 A few quickies I have to mention are the amazing Spitfire and Hurricane fly by I witnessed with my family. Seeing the Panopticon landmarks and a wishing tree stump while hiking around Lancashire was great. Also, meeting Robert De Niro in the local pub at the start of (cough) April. Then there’s bonkers stand up comedian Tony Law who insisted he had a selfie with me after a gig. I still love going to comedy nights; it helps me forget the weirdos out there who’ve had a sense of humour bypass!

I think 2016 was a really up and down year for most people. I still cannot believe how many celebrities have passed away in the last 12 months. Thankfully, my close family are still here and we are all soldiering on! I have fantastic parents, a brilliant brother and sister in law and of course an amazing wife who is undoubtedly my rock. I also have some really fantastic friends out there who I appreciate so much. I know I’ve missed off lots of important days out with great friends, both on and off the bank.

There’s already a lot going on in my diary for 2017 and the early signs are that it’s gonna be great.

For all the happy and smiling people out there I wish you all an amazing year! X