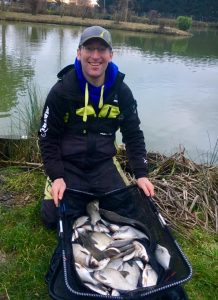 Fished the Dog Lane Silverfish Open today, which was a sellout with 22 of us booked on. I’ve drawn peg 34, in front of the island, which looks like a great carp peg. Five hours later I can confirm that after hooking more than my fair share of the things!

I started OK, catching some chunky skimmers, but then they seemed to completely shut up shop. For the next few hours all I could catch on anything I tried was either tiny roach or carp and my longest lines were a non-starter.

Thankfully a few hand-sized skimmers returned in the last hour and I managed to keep nicking an odd one, alternating two swims at 8m. I caught best on dead maggots and pinkies over small amounts of Dynamite Black Milled Expander, Green Swim Stim and Silver X Canal & Lake.

The bites were really iffy all day in the flat-calm conditions, so I regularly swapped between a strung-out rig and a double-bulk setup to try and figure things out.

The whole lake’s fished hard, so I was pleased to see my 13lb 11oz total was enough for 3rd overall. Dick Ashby was next door and a well-deserved 2nd with a lovely net of roach on his top kit for 14lb 4oz. The match winner was Jake King with 18lb of skimmers from peg 16 on the opposite bank.