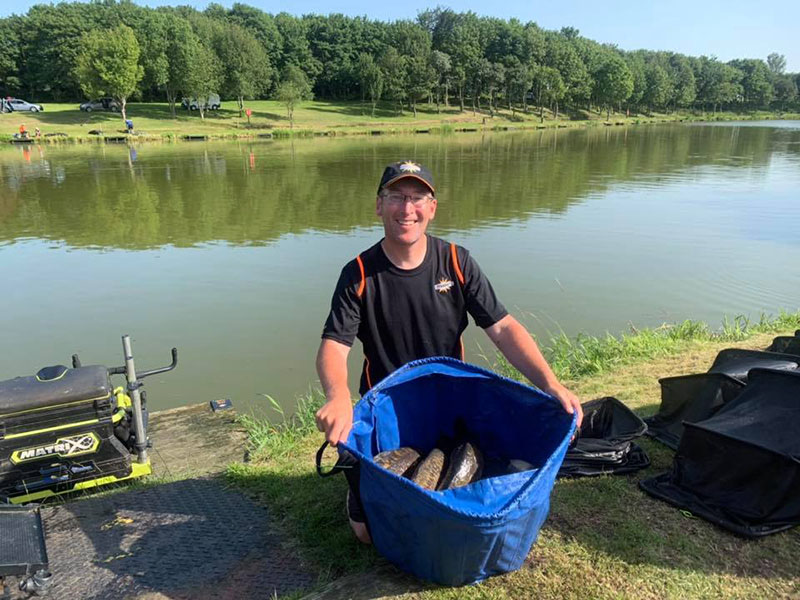 Blazing hot sunshine greeted us all for the inaugural £10,000 Dynamite Baits In The Mix bonanza match at Hayfield Lakes! I pulled out end peg 80 (of course!) on Dannie’s Island and was told I’d got half a chance but was probably the wrong end of the lake. Well there was certainly enough fish down there on the day, as I ended up with 103kg (227lb) for 2nd overall!

I had four carp on the pellet wag, four small ones down the edge and at least 20 good fish to 15lb on the mugging rigs. My best rig was a 4×10 dibber with a 0.18mm Power Micron hooklength, 16 Matrix Carp Rigger hook and green 16-18 Slik with my trusty MTX4 pole, fished anything from 7m to 16m.

Just two or three carp off the £10k win. Doh! In the last 30 minutes the big mugging fish got spooked and disappeared, so it nearly could’ve been. However, my fourth keepnet was much fuller than I realised and would’ve gone over the strict 80lb limit and been disqualified had I put one more fish in there, so I was a bit relieved in that respect!

So, I nearly won the £10k jackpot, but had to make do with £300 and a £150 bait voucher for runner up! Well done Paul Wright on the win with 114kg on the opposite bank. We had a good battle but I felt he was always well ahead, so I was a bit surprised to be a lot closer at the weigh in. Maybe next time?