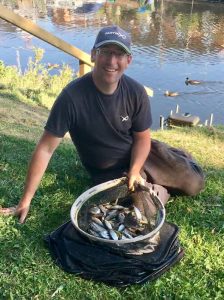 Just spent the last two very hot and sunny days on the Evesham Festival. Great weather for watching people fish; not so great weather for trying to catch on a clear and hammered river!

Saturday was the Wychavon Champs and peg 62 was not really where I fancied. It’s normally ok for some perch and eels, but the whole length fished terrible and these species were having none of it.

I’ve ended up with about 40 fish for 1lb 8oz, which was 4th in my 10 pegs! Two small perch on chop, about 10 really tiny roach on hemp, 15 just as tiny roach on tares and some tiny chublets on the waggler. Looking back I could’ve fished groundbait and pinkies for 3lb+ but other than the guy below me who had 4lb, which was the first peg above the ferry rope, it was a really grim section on paper.

Well done my mucker Tom Scholey on the win with a last-gasp barbel for a 8lb 10oz total. Only 15 of the 80 anglers broke the 3lb barrier, so it’s definitely one of the hardest matches I’ve ever fished on the river. 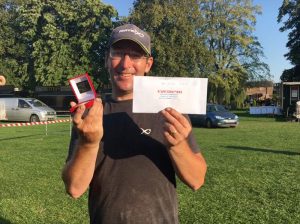 Straight after the match I had to make a detour to jump in a lake to get some bloodworm hookers for the next day. Not ideal as I was shattered, but I had no option. I just hoped the effort was worth it for the big one, the Evesham Champs, with bloodworm and joker allowed and £3,500 for the winner.

I drew peg 20, which is two pegs above the road bridge. Not a peg I fancied framing off, but it’s ok for a day catching small fish, which is also why pike are usually a big problem here.

After balling in with Dynamite Frenzied Hemp Black, Black Roach and Terre d’Arthur I’ve had a really busy day. For four hours I’ve caught tiny roach, so long as I could bypass the hordes of really tiny bleak. Last hour the pike have wrecked my peg and gobbled up seven fish. 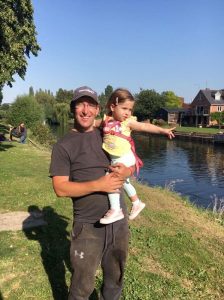 I ended with around 200 or so tiny roach and two perch for a 6lb total. I swung everything other than a bonus 3oz perch. With no sign at all of any better roach in the peg I’m not sure how I could’ve done much more than that. Steve Hemingray was 2nd overall a bit further upstream with 9lb, so my effort was more than enough to take the £200 section prize. Happy days!

Well done Spud Murphy on the win with 11lb from peg 8. As expected the weights were higher today and my 6lb was 11th out of 80 anglers.

Thanks to all the people who watched and said hello. Also, good luck to all the teams fishing the team event tomorrow. A well-earned chilling out day at home for me…