Through To The PF Pairs Final

Round 1 of this year’s Preston Pole Fishing Pairs was at Barston Lakes. This was a fantastic match with unbelievable weights in every single section! I was fortunate to be fishing with Alan Scotthorne and our combined weight saw us through to the Final at our first attempt!

Three pairs qualify from each qualify for the Final at Woodland View and it’s all decided on total weight, not section points. I ended up 2nd overall after a great head to head battle with Andy Power. I weighed an all-skimmer 88lb (well, I had about five roach too) and was pipped by about 5lb for the overall win. I really cannot complain too much about that, though, as it was a really exciting and pleasurable day’s fishing. 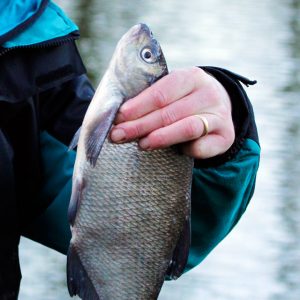 Fishing quite negatively with dead maggots over small amounts of fishmeal groundbait kept the skimmers coming freely, with the occasional look on a bloodworm swim to keep fish coming. I definitely felt in front much of the day but slowed right up in the last hour or so. In hindsight I should have gone further out or swapped to chopped worm or caster.

Either way, the whole place fished its head off with 40lb probably the average weight and loads n loads of skimmers feeding. That shows what’s possible on a pole-only event. I always think it makes for a much more productive day for more anglers when there are no feeders and big pellets flying out to the middle.