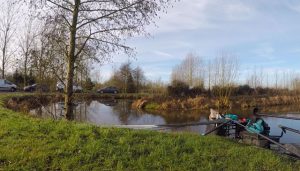 This was yet another pretty average day. I elected to do the draw and on paper it looked half OK and I’d drawn three end pegs!

We finally managed a draw on Jennys as Jamie Hughes was on peg 2, which I thought he’d do really well off – especially with Des Shipp next door on 26. I was wrong as they had 26lb and 27lb for 14th and 15th in their 26. Sod’s law, New Pool finally competed with this lake!

Joe Carass was on Top 20, which has been a great area throughout this winter league. The entire main bowl has been good as I’ve never seen it so generously pegged before. I still think 12’s the out and out flyer on there and Paul Yanni Yates won the lake off that with 50lb. Joe was 2nd on the lake with 36lb and 5th in his 26, so well done that man!

Paul Bick was our biggest worry as he was on High 14. It’s next to one of the best pegs on the lake but might as well be a million miles away. I feared he wouldn’t come higher than halfway and was right as he managed 15th. This lake really isn’t a patch on the others at TBF as far as fairness goes.

For me, I pulled out Canal 13 and was reasonably happy. It’s a nice corner peg with lots of room and has its day if the fish want to be that end. More often they are up towards peg 24 and peg 1 however and with Paul Holland on that I knew we’d be up against it. This lake however fished the patchiest of the lot after a mega hard frost. Paul surprisingly had just 31lb and then no one broke 15lb from him up to me. I managed 26lb of mostly small stockies and little ghost F1s, plus some chunky roach. I only had five big F1s and no proper carp whatsoever, which really surprised me. And despite the aerator rope knocking before the start I never had so much as a bite anywhere near it! Ade Higginbottom was opposite me and only had 12lb, and I think that showed we weren’t on many fish this day. There were three 30lbs the complete other end of the lake and the in-form reed bed on peg 18 came good again with a level 50lb. No one on the lake had much at all on bread either, which is what you normally need to catch on for a good weight. Clearly an off day for Canal. 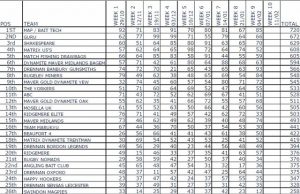 I ended up 5th on the lake and in my experience, Extension Pool, which this lake is split with, often fishes poorly after a temperature drop. What do I know? Extension fished its nuts off, as did the rest of the complex bar my lake! There were 50lbs all over and a 76lb best weight Extension! That relegated me to a very disappointing 14th in section off a peg I know is worth more. I’m still surprised to only catch little stockies off it. I tried all over my peg but the only place I really caught was off the point of the island in about 3ft of water. This peg is dead shallow anyway and only 3.5ft at the most all over. I pulled out of one half decent F1 at the net and had something take me right round the back of the island and break me, so it was a bit of a scrappy match for me. I’d probably take the peg again. But I’d still take pegs 1, 18 and the 20s over it in the winter, so I suppose I finished up where I expected.

We ended up with an average 59 points or so and have now dipped to 5th in the league. Not the best team performance we’ve had by a country mile. It’s Bicky the Riverfest King’s turn to draw for the 10th and final round. It’s possibly our last year together as the Match Fishing Drawbags, too, so lets hope we can go down in a blaze of glory!