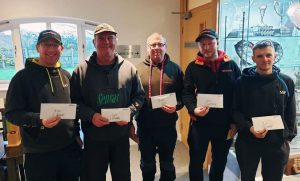 After a rollercoaster 10 rounds I got 5th overall and a nice £200 envelope in the Packington Winter League.

It could have been a lot higher, but pulling out peg 6 on Molands on the final round put paid to that! When I saw the way the cold wind was hitting it I feared it was game over. I caught my one and only F1 with 12 minutes to go, which was a nice big 5lber, and added a few roach for 6lb. Next door had 3lb, but I doubt I beat anyone else. I never gave up so I’m not sure what else I could have done. Moody Molands strikes again!

It was still nice to make the top 5 out of 60 anglers and I must say very well done to Lee Richards on a convincing win and all the other framers. Also a huge thanks to John Burchell and his Packington Fishery team for running an excellent league.

It’s a unique venue and I’ve had some great matches over the series… plus a few to forget. There’s something special about the place that keeps us all coming back!