Sun’s Out And The Fish Are Up! 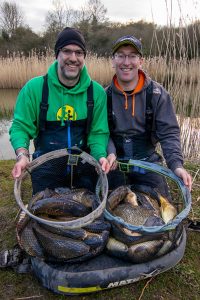 Can you believe that Steve and I were actually complaining how bright and sunny it was yesterday? Clear blue skies and bright sunshine greeted us at Bishops Bowl. While we tackled up on one of my favourite swims I spotted a basking carp a foot below the surface. Five minutes later there were half a dozen more. By the time we were ready to start we could see carp everywhere!

With it being such a cold and wet week and the water being surprisingly clear I’d planned to start off negatively dobbing bread around the reeds. However, once all these dark shapes began cruising around our thoughts turned to proper summer ‘mugging’ tactics!

It took just a minute to catch one, flicking a free-falling hook bait towards a pod of fish. A couple more followed before the fish realised it was March and not August! We had made the most of the opportunity, though, and it was a great start to the session. Once the fish dropped back down we reverted to more wintery ‘dobbing’ tactics and continued to put a nice run of fish in the net. Nothing massive, but still great fun as they scrapped well in the clear water.

We could have caught all day like this, but I was keen to fish ‘properly’ and actually feed some bait! Fishing soft pellets and corn at 14.5 metres, the fishing was slow at the start but got better and better. Steve even caught a surprise chub on corn!

I fancied having a very quick go myself on the adjacent peg to see if I could catch them on 6mm hard pellets, but one fish shallow was all I mustered. I’m not sure they were quite ready for hard 6mms, plus they wanted to be in the shade of the reeds further out, but it was wishful thinking. This seemed to coincide with a lull in sport and the sun being at its brightest. Even the glare from the pellets splashing on the surface was blinding, yet the day before I was shivering and wishing I’d brought an extra flask!

The sun was now directly in our eyes, so Steve switched his attentions back down his edge for another decent run of small carp. All the while he’d been priming a short swim, which finally came to life in the last hour. A nice flurry of chunky carp here was a great end to a refreshingly nice session, bagging up in the sun!

A massive thanks to Bishops Bowl Fishery for having us. The whole venue is fishing really well at the moment, so definitely pay it a visit if you can! 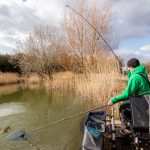 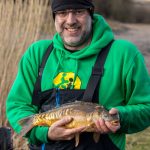 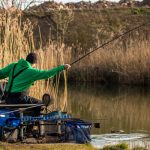 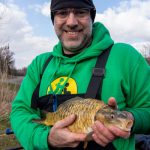 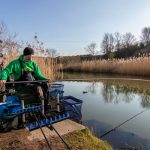 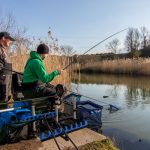 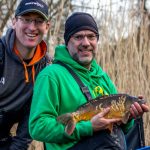 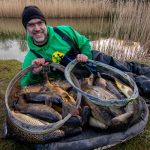