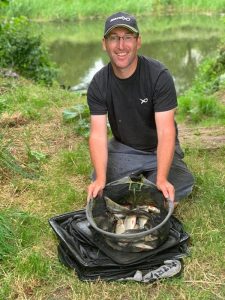 I fancied a nice day on the river today, so I booked in for the Wychavon Championship qualifier at Evesham. As per usual I was up at silly o’clock the night before tying rigs and hooks, cooking hemp and all that gubbins, so I hoped the effort was worth it!

Last year I qualified at my first attempt off peg 50 (the video from that match is still on my YouTube channel, by the way). No cameras this time but, lo and behold, I drew the same nice peg again!

This time it fished a bit different as there was a lot more flow to deal with and snags in different places. I fed a close-in perch swim, a flat float swim where I found a clear spot at 9m, hemp and casters at 13 to 14 metres and finally a 2AAA waggler for across. No margin rigs for carp today!

Despite nice overcast conditions I surprisingly only managed 1lb or so of small roach on the seed. I also caught 2lb of perch and a bootlace eel on worms. The bulk of my catch was made up of little barrel chub up to 12oz. A pike snaffled my last fish, but other than that I had a really nice day.

My 8lb 15oz total was enough to frame in 4th place and qualify for the Evesham Festival once again. Happy days!

Well done to Mark Newman on the win with 16lb of chub off peg 36. John Curtis had two tench in his 11lb catch for 2nd and local ace Ian Shepherd was 3rd with 10lb off peg 78.